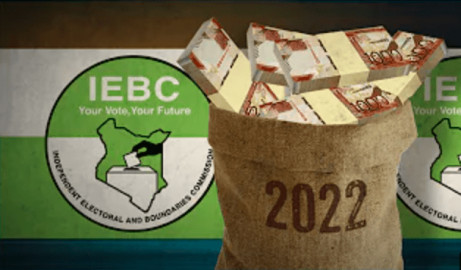 Candidates and Political parties are free to spend as much money as they can afford in next year’s general election campaigns.

This is after the electoral body IEBC withdrew spending limits earlier published in the Kenya gazette in response to a decision by members of parliament who rejected finance regulations, due to a technicality.

This essentially rendering a law enacted way back in 2013 meaningless for a whole 14 years, with the earliest implementation now expected in the 2027 general election.

The Independent Electoral and Boundaries Commission (IEBC) in a Gazette Notice dated 8th October, 2021 revoked the campaign spending limits that had provided for maximum expenditure by candidates and political parties, as well as maximum contributions by persons supporting a political party or candidate.

In the notice, IEBC cited a resolution by the National Assembly that in late September that rejected campaign-financing regulations submitted by IEBC late July.

In the now revoked spending limits, a presidential candidate had been allowed to spend up to Ksh.4.4 billion in campaigns. Persons supporting such a campaign had been allowed up to 20 percent of contribution, meaning Ksh.880 million unless they are the candidate.

For various county seats election, candidates had been allowed to spend up to Ksh.21 million in Lamu County, Ksh.117 million in Nairobi and a maximum of Ksh.123 million in Turkana.

"People have unlimited freedom to spend money. Unfortunately, money will play a bigger role that ideal…there is no regulation, they just use money the way they want," added Molu.

Campaign financing is a constitutional requirement under Article 88, 4, (i) which requires IEBC to “regulate the amount of money that may be spent by or on behalf of a candidate or party in respect of any election.”

In January 2017, the law was deferred until the 2022 general election. Parliament did nothing about the implementing regulations between September 2017 and July this year. In July this year, IEBC resubmitted the regulations tabled in 2016.

The Committee on Delegated Legislation recommended to the House to annul the regulations which it did on September 28th. Despite IEBC having published the campaign spending limits on the 9th of August, a year to next year’s election, they have now had to take it back.

The earliest the Campaign-Financing Act can apply in a general election now could be in August 2027.

"That will be almost 14 years waiting to implement an Act of parliament, we may not have the goodwill, what we are seeing now is political pushback and impunity to frustrate the campaign financing," says Steve Ogolla.