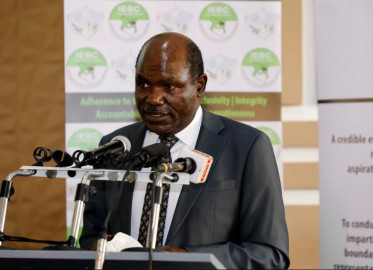 The Independent Electoral and Boundaries Commission (IEBC) is starting Friday expected to sign a framework agreement with a Greek company over the supply of ballot papers and crucial election management forms for the 2022 general election.

This comes even as IEBC got a reprieve after the High Court overturned an earlier decision by the Public Procurement Review Board nullifying a tender issued back in April for the supply of election technology.

Should IEBC finalise on the framework agreement for the supply of ballot papers this Friday, they will be at least one step ahead in preparing for the 2022 polls.

A Greek firm, Inform Lykos, was identified two weeks ago as the best bidder for the supply of ballot papers, voters register and results declaration forms.

IEBC has been waiting for the lapse of 14 days since settling on the firm, before signing the agreement.

The commission is however yet to decide on the number and look of supplies it needs, as such a decision will depend on the number of registered voters, the number of polling stations and candidates, all of which will be known early next year.

With the framework agreement, IEBC will remain with just placing an order and will be charged as per the agreed price margins.

The National Assembly Budget Committee raised questions to the IEBC over the choice of Inform Lykos whose entry into the African market was first in 2019 when it supplied 160 million ballot papers during the Nigerian election, but not without complaints.

In the meantime, the High Court has overturned a decision of the Public Procurement Administrative Review Board that had nullified IEBC election technology tender on grounds that it had not factored the scope of local content.

Justice Jairus Ngaah found that the review board admitted an application that should not have been granted since a person who did not qualify as a bidder filed it out of time. IEBC is now back to reviewing the tender applications before it.

On April 14 this year, IEBC advertised the election technology tender, that was to close a month later, but extended the deadline to 18th of June.

On that day, IEBC opened the received bids, eight of them recorded.

Nearly two months later, Risk Africa Innovatis challenged the tender process at the review board. On September 1, the board returned a verdict agreeing with the applicant.

And then on September 17, Smartmatics International Holding, one of the bidders shortlisted filed an application at the High Court challenging the board’s decision that had ordered IEBC to retender the election technology.

The High Court has now agreed with the firm, and cleared IEBC to resume evaluating the bids received.

Five companies are under consideration for the KIEMS technology including the applicant at the High Court Smartmatics International Holding.

IEBC hopes to procure additional KIEMS kits to replace spoilt ones, and cater for more polling stations to be created on account of a longer voters register.

IEBC will also spend on an election management software that can register voters in future, identify voters at elections and transmit election results.