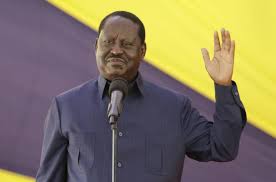 Opposition leader Raila Odinga has strongly dismissed reports suggesting that he is in the 2022 presidential race.

In a press statement issued on Sunday, Odinga, through his spokesperson Dennis Onyango, said he has not declared interest in the 2022 race to succeed President Uhuru Kenyatta.

Odinga, however, did not deny or confirm whether his name would be on the 2022 presidential ballot paper.

“Raila Odinga strongly objects to reports appearing on the Sunday Nation that put him in a presidential race he has not declared any interest in and which does not exist currently,” said Odinga.

Mr. Odinga said he was “deeply disappointed” by the media reports, adding that his calls for ODM to prepare for grassroots elections were twisted to mean he is in the presidential race.

The former prime minister said it is “way too early” to focus on the 2022 presidential race which is three years away.

“Mr Odinga entered no race yesterday and he knows no race that is on as reported in Sunday
Nation. It’s way too early,” he said.

The opposition leader maintained that the country’s focus should be on addressing issues such as  violent elections every five years, runaway corruption, troubles in the counties, reforms to
education and endangered national values.