Imam tells New Zealand: ‘we are not broken’ 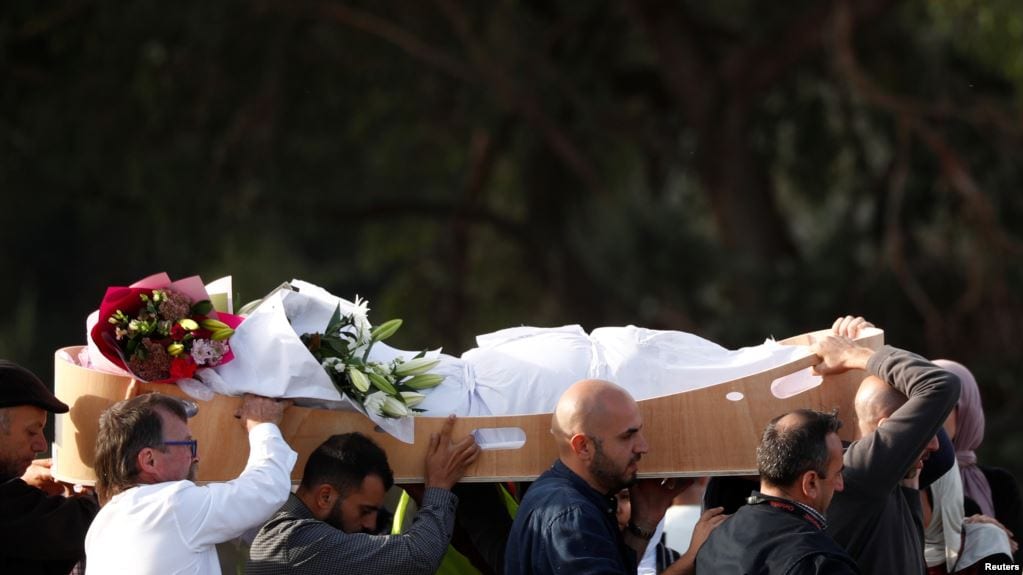 Thousands of people gathered Friday for a mass funeral in a cemetery in New Zealand where 26 of the 50 victims of a mass shooting in a mosque last Friday were buried. The youngest victim buried was 3 years old.

Earlier, at an outdoor service across from the mosque where the fatal attack happened in Christchurch, Imam Gamil Fouda addressed a crowd of thousands, telling them that “We are broken-hearted, but we are not broken.”

He told the crowd “hate will be undone and love will redeem us.”

The imam thanked “the neighbors who opened their doors to save us from the killer” and “those who pulled over their cars to help us.”

Fouda also acknowledged New Zealand Prime Minister Jacinda Ardern for “Holding our families close and honoring us with a simple scarf. He said the prime minister’s leadership was “a lesson for the world.”

Women around New Zealand wore headscarves Friday to show their support and respect for the Muslim community.

Reuters reports that female police officers at the outdoor service also donned headscarves and wore a red rose on their uniforms.

Before the imam spoke, there was a public call to prayer at the park that was broadcast on radio and television across the country.Two minutes of silence followed the call to prayer in remembrance of those who died in the mosque.

Ardern said after the call to prayer: “New Zealand mourns with you, we are one.”

Ardern has been swift in her reaction to the bloody attack on the mosque.

She imposed an immediate ban on all military-style semi-automatic and automatic assault rifles.

The ban, which the prime minister announced Thursday in Wellington, includes high-capacity magazines, which can hold multiple rounds of ammunition, and accessories that can convert ordinary rifles into fast-acting assault rifles. Ardern said she imposed the sales ban to prevent stockpiling and that a complete ban on the weapons would be implemented after new laws take effect.

Ardern also announced a large-scale buyback scheme to encourage owners of such weapons to surrender them to authorities. She said the government could spend up to $140 million to buy back guns from owners who turn them in. The military and police would be exempt, as would pest control businesses. New Zealand police said on their website a “transitional period” would allow people to turn in their guns without penalty.

Parliament is expected to approve the proposed laws when it reconvenes in mid-April.

Authorities have charged 28-year-old Australian Brenton Harrison Tarrant with murder in connection with the March 15 attacks on the al-Noor and Linwood mosques. The self-proclaimed white nationalist did not enter a plea in his initial court appearance the day after the attack. His next court appearance is April 5.