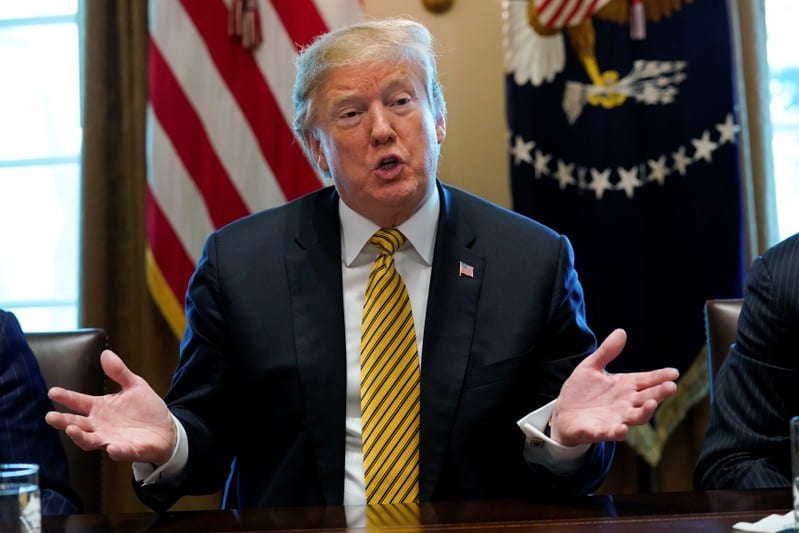 The United States and Europe have been locked in a years-long spat over mutual claims of illegal aid to plane giants, Netherlands-based Airbus and U.S.-based Boeing Co, to help them gain advantage in the world jet business.

The case, which has been grinding its way through the World Trade Organization for almost 15 years, is approaching the final stages of arbitration.

“The World Trade Organization finds that the European Union subsidies to Airbus has adversely impacted the United States, which will now put Tariffs on $11 Billion of EU products!” Trump said on Twitter. “The EU has taken advantage of the U.S. on trade for many years. It will soon stop!”

Trump’s public attack on the EU came even as his administration has yet to hammer out trade deals with China and neighbors Mexico and Canada.

A day earlier, the U.S. Trade Representative proposed targeting a list of EU products for tariffs, ranging from large commercial aircraft to dairy products and wine, as retaliation for European aircraft subsidies. The final list is expected this summer.

In response, the European Commission said earlier Tuesday it had started to draw up plans to retaliate over Boeing subsidies.

“The Commission is starting preparations so that the EU can promptly take action based on the arbitrator’s decision on retaliation rights in this case,” a Commission spokesman said. “The European Union remains open for discussions with the United States, provided these are without preconditions and aim at a fair outcome.”

Both sides have won partial victories in claiming Airbus and Boeing received unlawful subsidies but disagree on the amount involved and whether each has complied with earlier WTO rulings.

Airbus said it saw no legal basis for the U.S. move and warned of deepening transatlantic trade tensions.

The EU is already facing U.S. tariffs on its steel and aluminum exports and Trump has repeatedly threatened to hit EU cars with punitive duties.

“When I see the situation global growth is in, I don’t think we can afford to have a trade conflict, even if only on the specific issues of the aircraft industry in the United States and Europe,” he said.

Analysts were divided over whether the ramped-up dispute would lead to greater global trade issues.

Germany is particularly apprehensive of possible U.S. tariffs on car imports. The United States is a major market for Volkswagen, Mercedes maker Daimler and BMW.

Moody’s said on Tuesday that potential U.S. tariffs on imported autos and parts represented a significant risk to global growth and would hinder economic momentum in Germany, Japan and Korea.

“ … The U.S. wants to pressure the EU to engage in meaningful trade talks, but without having to apply the more painful measure of automotive tariffs,” said Cailin Birch, global economist at The Economist Intelligence Unit.

Fabiana Fedeli at Robeco sees the latest moves as tactical.

“The new tariffs … are a drop in the ocean as a percentage of the overall trade between the U.S. and Europe and we view them as a negotiating tool to set the tone for what the really important negotiations are, namely autos,” she said.