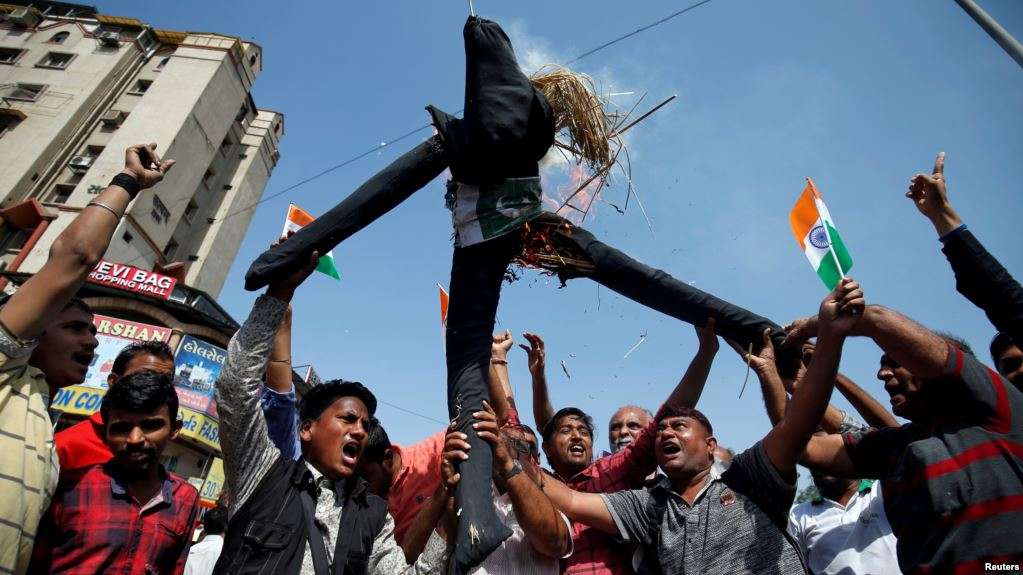 India says it has carried out pre dawn air strikes in Pakistan on a camp of the Islamist militant group Jaish-e-Mohammad, which claimed responsibility for a suicide car bomb that killed 40 paramilitary troops in Indian Kashmir nearly two weeks ago.

The air strikes, which India says killed many militants, will escalate military tensions between the nuclear-armed rivals.

In a brief statement, Indian foreign secretary Vijay Gokhale called it a “pre-emptive strike” prompted by credible intelligence that the Jaish-e-Mohammed was planning another suicide terror attack in the country.

He said India struck the group’s biggest training facility located at Balakot in Pakistan. “In this operation a very large number of Jaish e Mohammed terrorists, trainers, senior commanders and groups of jihadis, who were being trained for fidayeen action had been eliminated.”

India had taken care to avoid civilian casualties according to Gokhale. “The facility is located in thick forest on a hilltop far away from any civilian presence.”

In Pakistan, Prime Minister Imran Khan called an emergency meeting of his national security committee Tuesday, after which his office released a statement saying, “Once again [the] Indian government has resorted to a self serving, reckless and fictitious claim. This action has been done for domestic consumption being in [an] election environment, putting regional peace and stability at grave risk. The claimed area of strike is open for the world to see the facts on ground. For this domestic and international media is being taken to the impact site.”

Major General Asif Ghafoor, a spokesman for Pakistan’s military, has disputed India’s version of the attack. In a tweet Tuesday, he said, “Indian aircrafts intruded from Muzafarabad sector. Facing timely and effective response from Pakistan Air Force released payload in haste while escaping which fell near Balakot. No casualties or damage.”

Analysts said this is the first air strike launched across the line of control in Kashmir since the two countries fought a war in 1971.

Indian forces and air defenses have been put on high alert in anticipation of retaliatory action by Pakistan, which had vowed to respond to any military action by India. There also has been a large troop buildup in Indian Kashmir in recent days.

The Indian foreign secretary reiterated New Delhi’s calls on Pakistan to take action against militant groups in its territory. “We expect that Pakistan lives up to its public commitment and takes follow up actions to dismantle all JeM and other camps and holds the terrorists accountable for their actions,” he said.

The latest assault – the deadliest in Indian Kashmir — led to widespread anger in India and calls for retaliation. Indian Prime Minister Narendra Modi had promised a strong response and said the armed forces had been given the freedom to take action.

The targeting of militant camps is a departure from India’s decades-old policy of restraint born out of fears of triggering an outright conflict. The militant groups are fighting for either Kashmir’s independence or its merger with Pakistan.

The military action follows a diplomatic offensive in which India says it is seeking to isolate Pakistan for its alleged support to militant groups. The Himalayan territory is divided between the two countries and has triggered two of their three wars.

Last week India welcomed a United Nations Security Council statement that condemned the attack in Kashmir and called on all countries to “cooperate actively” with the Indian government in holding the perpetrators, organizers and sponsors of such attacks accountable.