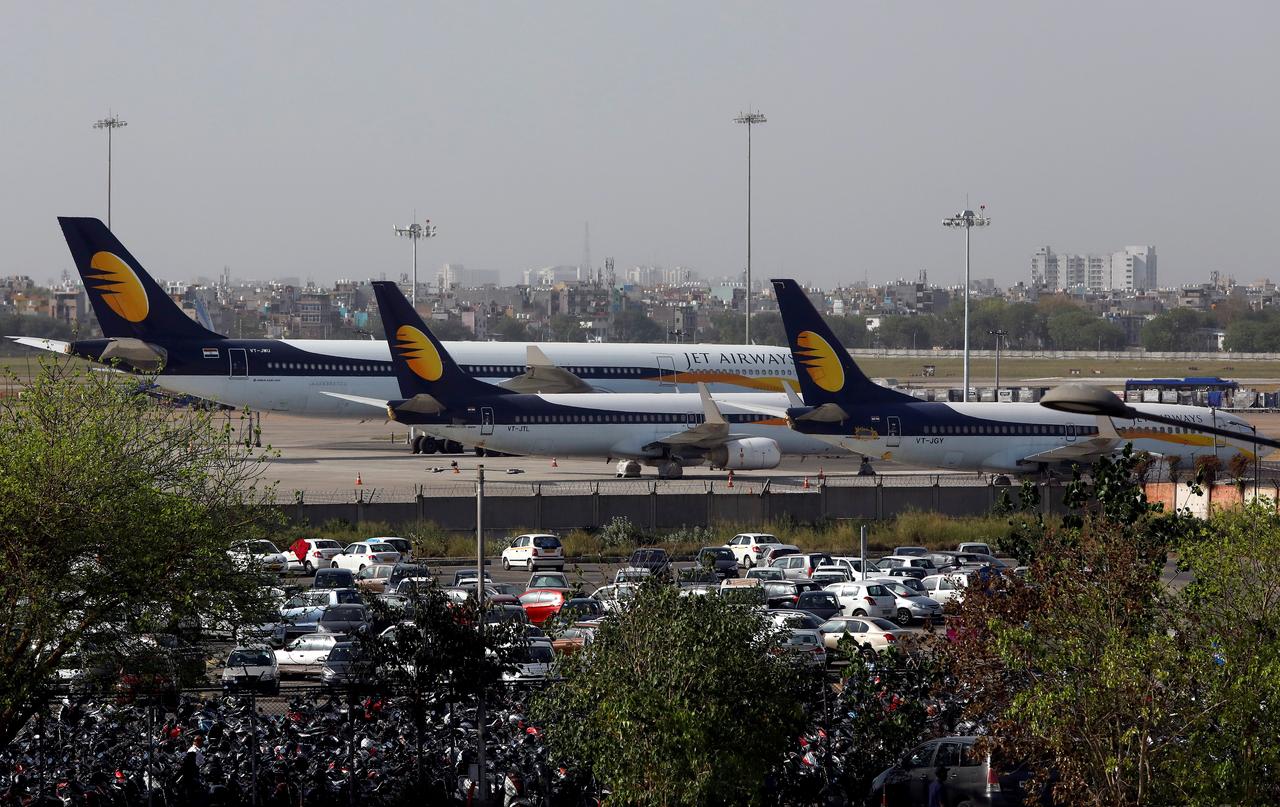 Embattled Jet Airways halted all flight operations indefinitely on Wednesday after its lenders rejected its plea for emergency funds, potentially bringing the curtains down on what was once India’s largest private airline.

The carrier, saddled with roughly $1.2 billion of bank debt, has been teetering for weeks after failing to receive a stop-gap loan of about $217 million from its lenders, as part of a rescue deal agreed in late March.

“The airline has been left with no other choice today but to go ahead with a temporary suspension of flight operations,” the company said in a two-page statement late on Wednesday.

At its peak, Jet operated over 120 planes and well over 600 daily flights. The airline, which has roughly 16,000 employees, has in recent weeks been forced to cancel hundreds of flights and to halt all flights out of India, as funds have dried up.

Intense competition from low-cost carriers, like Interglobe-owned IndiGo and SpiceJet Ltd, together with higher oil prices, hefty fuel taxes and a weak rupee have piled pressure on the airline in recent months.

In its statement on Wednesday, the airline thanked its loyal customers for their support over 25 years and said it “sincerely and profusely apologises for the disruption to the travel plans of all its guests.”

“Since no emergency funding from the lenders or any other source is forthcoming, the airline will not be able to pay for fuel or other critical services to keep the operations going,” the airline said.

Two sources at state-run banks told Reuters that the banks had rejected a request for 4 billion rupees ($58 million) from Jet to keep itself temporarily afloat.

“Bankers did not want to go for a piecemeal approach which would keep the carrier flying for a few days and then again risk having Jet come back for more interim funding,” said one of the bank sources directly involved in Jet’s debt resolution process.

SALE PROCESS
The airline said it would continue to work with its banks, who are trying to identify an investor to buy a majority stake and try to turn Jet around. Jet said that it hopes to resume flying soon.

Its lenders, led by State Bank of India (SBI), last week accepted expressions of interest for an up to 75 percent stake in the airline.

In a tweet, India’s Ministry of Civil Aviation said it would support the bank-led resolution process to rescue Jet, adding it expects the process to end by May 10.

It is still far from clear though, whether a firm bid will emerge and if a buyer will be identified in time.

Shares in the company, which have tumbled about 60 percent in the last year, closed on Tuesday at 240.50 rupees a share. Indian markets were closed on Wednesday due to a public holiday. Jet still has a market capitalization of nearly $400 million, as investors have clung onto hopes of a rescue deal being clinched.

Jet’s CEO Vinay Dube, in a letter to employees on Wednesday that was seen by Reuters, warned that the sales process would take some time and could throw up several more challenges, but he added that he was confident Jet Airways would fly again.

EMPLOYEE ANGER
If Jet fails to attract a buyer and collapses that would put thousands of Jet’s employees out of jobs, many of whom have been unpaid for weeks or months, and affect thousands of others whose jobs are tied to the fortunes of the airline.

Jet’s failure would also be a blow to Indian Prime Minister Narendra Modi, who is currently seeking re-election in a weeks’ long general election. Modi’s critics blame his government for rising unemployment.

Some employees on Wednesday also blamed the government for failing to do enough to rescue Jet.

“We had appealed to everyone, including the prime minister,” said Asim Valiani, vice president of Jet’s main pilots’ union, the National Aviators’ Guild. “At least now we know the talk about caring for employment and creating jobs was all eyewash.”

He said the guild was exploring dragging Jet to a bankruptcy court over unpaid dues.

Jet employees are expected to hold a demonstration in New Delhi on Thursday, while the union representing its ground staff is expected to host a press conference in Mumbai.

LESSORS FLEE
A Jet collapse would also be a potential blow to Boeing Co, which is already grappling with the fallout of two recent fatal crashes involving its 737 MAX aircraft. Jet has more than 100 of the 737 MAX planes on order.

The crisis at Jet, which owes vast sums to suppliers, pilots, lessors and oil companies, deepened in recent weeks as its lessors scrambled to de-register and take back planes, in a sign the bank rescue plan failed to assuage their concerns.

India’s aviation regulator said on its website on Wednesday that lessors had applied to de-register another four Boeing Co 737 planes. Overall, Jet’s lessors have, so far, sought to deregister and repossess at least 48 planes operated by Jet. Once deregistered, lessors are free to reclaim a plane and lease it to another airline.

The rapid exodus of planes risks further eroding value from the carrier, even as lenders scurry to find an investor to pour new money into the airline.