No sex outside marriage: Indonesia to pass new law 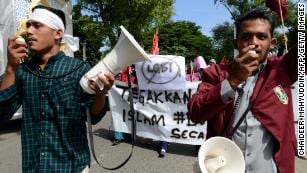 Indonesia is set to pass a highly controversial new penal code that will criminalize consensual sex outside of marriage and effectively outlaw same-sex relations.

According to CNN, human rights groups have criticized the draft criminal code terming it as disastrous, not only for women and religious and gender minorities, but for all Indonesians.

The lobby groups say that if passed, discrimination against women, religious minorities, members of the LGBT community, as well as stymie freedom of speech and freedom of association will be rampant.

According to Andreas Harsonso, a senior Indonesia researcher at Human Rights Watch, if passed, the next century would “likely be disastrous for minorities in Indonesia.”

Indonesia’s Minister of Law and Human Rights Yasonna Laoly, who reintroduced the Bill in 2015 however says that the new criminal code has been in the making for decades.

The law is said to replace the 100-year-old Dutch colonial-era penal code and would make Indonesia’s criminal law more in line with how Indonesians live today.

“We would like to change to our new penal code to focus more on Indonesian perspectives in the law. The reason is because there are some laws in the penal code that are not suitable for Indonesia anymore,” said Laoly.

The House of Representatives commission that oversees legal affairs agreed on the final draft on Wednesday and the Bill will go to a Parliamentary plenary session on September 24, 2019 where it will be made into law.

Once it is ratified, it will take about two years to take effect so that the public and law enforcement can become familiar with the new regulations.

“…This is a formality because all the parties in parliament have agreed,” said Laoly.

Indonesia is the world’s largest Muslim- majority country but it takes pride on being a tolerant nation with a diverse mix of ethnicities and religions.

Lately, there has been a rising intolerance against religious and sexual minorities from increasingly assertive religious conservatives.