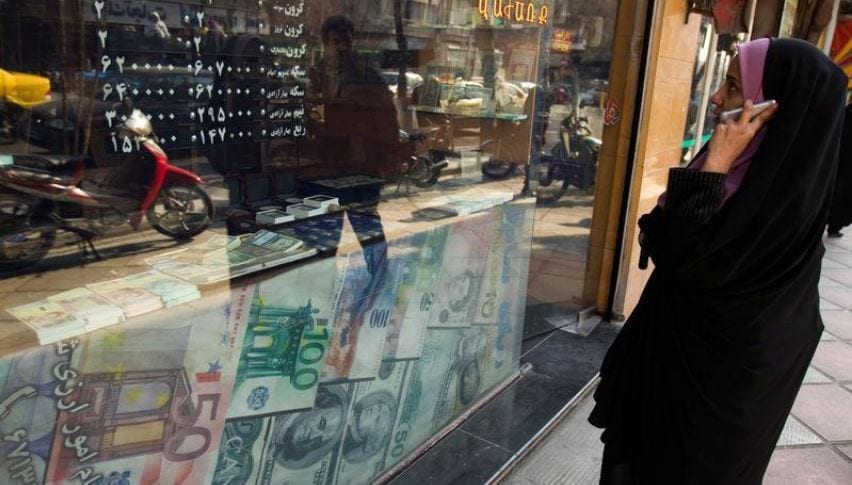 Iran is banning imports of over 1,300 products, preparing its economy to resist threatened U.S. sanctions, amid rare public protests against the plunge of its currency to record lows.

Police patrolled Tehran’s Grand Bazaar on Monday as security forces struggled to restore normality after clashes with protesters angered by the rial’s collapse, which is disrupting business by driving up the cost of imports, witnesses said.

Traders from the bazaar, whose merchants supported Iran’s 1979 Islamic revolution, told Reuters by telephone that most shops remained closed.

“Police have dispersed the protectors. We are all angry with the economic situation. We cannot continue our businesses like this. But we are not against the regime,” said a merchant in the bazaar, who asked not to be identified.

Industries and trade minister Mohammad Shariatmadari slapped the import ban on 1,339 goods that could instead be produced within the country, Iran’s Financial Tribune newspaper reported on Monday, quoting an official document.

The order suggests the U.S. sanctions threat is pushing Tehran back toward running a “resistance economy” designed to conserve foreign exchange reserves and become as self-sufficient as possible in many products.

The rial is under heavy pressure from the U.S. sanctions threat. It sank as low as 90,000 against the dollar in the unofficial market on Monday from 87,000 on Sunday and around 75,500 last Thursday, according to foreign exchange website Bonbast.com. At the end of last year, it stood at 42,890.

After U.S. President Donald Trump decided to withdraw from world powers’ deal with Iran on its nuclear program, some U.S. sanctions are to be reimposed in August and some in November.

This may cut Iran’s hard currency earnings from oil exports, and the prospect is triggering a panicked flight of Iranians’ savings from the rial into dollars.

Hundreds of merchants gathered in front of parliament in Tehran on Monday to protest at the rial’s fall, witnesses said.

In the Grand Bazaar, hundreds staged a similar protest, videos posted on social media showed. A larger, sustained series of protests could put pressure on President Hassan Rouhani, who has already been harshly criticized by hardliners for his economic record.

Ali Fazeli, the head of Iran’s Chamber of Guilds, a business association, told the semi-official Tasnim news agency later on Monday: “Business is as usual in the Grand Bazaar.”

State TV quoted Tehran’s deputy governor Abdolazim Rezaie as saying “no one has been arrested in the Tehran protests”, adding that all the shops will be open on Tuesday.

Iran eased its “resistance economy” policy after many international sanctions were lifted in January 2016 under the nuclear deal. Rouhani announced plans to boost Iran’s foreign trade and give foreign companies a bigger role in its economy.

With Iran now aiming to close its markets to many foreign products and the government intervening to support locally owned companies, those goals look more distant.

Mehrdad Emadi, an Iranian economist who heads energy risk analysis at London’s Betamatrix consultancy, said the sanctions threat was strengthening interests in the Iranian government that favored tighter state control of the economy.

“In the coming months we will see much more intervention in the economy by the government, a centrally imposed style of management by dictation,” he said.

One result is likely to be a shift of influence over Iran’s non-oil foreign trade from the private sector, along with a strong presence by the government’s Revolutionary Guards, to near-complete dominance by the Guards, he added.

Emadi and other Iranian economists noted that Iran had imposed import bans during the previous sanctions era before 2016 with only limited success.

Many foreign goods continued to enter the country at higher prices as a result of corruption and smuggling, benefiting business interests with the close official ties needed to arrange the shipments.

The government is justifying its latest clampdown on imports by citing economic security. The Tehran Times quoted Mohammad Reza Pourebrahimi, head of parliament’s economic committee, as saying the ban would prevent an outflow of $10 billion of foreign currency.

The International Monetary Fund estimated in March that the government held $112 billion of foreign assets and reserves, and that Iran was running a current account surplus. These figures suggested Iran might withstand the sanctions without an external payments crisis.

But as U.S. pressure constricts Iran’s access to the international banking system, its ability to deploy some of those resources may have suffered. Indian government sources told Reuters last week that New Delhi was looking to revive a rupee trade mechanism to settle part of its oil payments to Iran, fearing foreign channels to pay Tehran might close.

Concern about the rial’s vulnerability is prompting ordinary Iranians to pour money into non-cash assets. Tehran real estate prices have climbed and Iran’s stock market has jumped 17 percent since the end of May to a record high. Prices of gold coins have also risen sharply, local media reported.