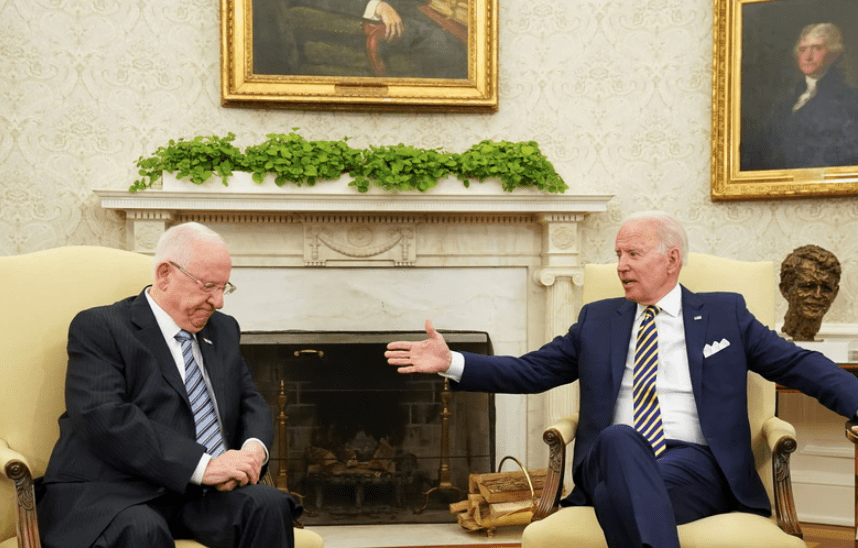 The subject of Iran overshadowed an Oval Office meeting Monday between U.S. President Joe Biden and his Israeli counterpart.

Biden made the statement a day after he ordered airstrikes against what U.S. military officials describe as a pair of operational and weapons storage facilities of Iranian-backed militias in Syria and Iraq.

The attacks occurred amid ongoing negotiations in Austria between Iran and six world powers, including the United States, to try to revive a deal limiting Iran’s nuclear program.

During his meeting with Rivlin, Biden defended his order for the military response.

“I directed last night’s airstrikes targeting sites used by the Iranian backed militia groups responsible for recent attacks on U.S. personnel in Iraq,” he said, adding he had the authority under Article Two of the U.S. Constitution and that is acknowledged by lawmakers on Capitol Hill.

Some lawmakers in Biden’s Democratic Party, however, are uncomfortable with this broad interpretation of the Constitution’s war powers authority, as well as early 21st century authorizations for use of military force by the president.

The Biden administration carried out similar airstrikes in February.

A member of the Senate’s foreign relations committee, Chris Murphy, expressed concern Monday that fighting between the U.S. military and Iranian-backed militias is beginning to resemble a “low-scale war.”

Rivlin, who leaves the mostly ceremonial office next month after a seven-year term as Israel’s president, said Biden’s declaration of an unwavering commitment to Israel’s self-defense allows “Israelis to understand that we have a great friend at the White House.”

Both governments are making adjustments to their 73-year-old relationship after recent changes of their respective political leaders.

Biden said he looks forward to welcoming the new Israeli prime minister, Naftali Bennett, to the White House soon, and, in response to a VOA question on when he will visit Israeli, said, “I don’t have a date, but I will.”

“Both new administrations want to get back to good relations and they will both reach that by not changing the status quo. Israel has a government with too many contradictory ideologies to be able to follow any one of them, and the U.S. shows no intention of doing anything to implement its stated goal of a two-state solution” for Palestinian statehood, said Paul Scham, who directs the Gildenhorn Institute at the University of Maryland-College Park.

“Israel knows it can’t stop the U.S. from moving towards a new JCPOA (nuclear deal with Iran), but wants good relations more than anything,” Scham, who is also a non-resident scholar at the Middle East Institute, told VOA.

Other analysts observe the new Israeli government clearly signaling a less partisan approach to relations with Washington than its predecessor.

Bennett’s government is viewed as more moderate in some respects than Netanyahu’s, but it is “unlikely to take major steps to help end ongoing occupation and de facto annexation in the West Bank or to strongly pursue Israeli-Palestinian peace — and therefore will continue to have significant differences with the U.S. on these critical issues, while finding common ground on others,” said Logan Bayroff, a spokesperson for J Street, a liberal advocacy group focused on Israel.

“As the new government finds its feet, we’re encouraging the Biden administration and Congress to make absolutely clear both that the U.S. is completely committed to Israeli security, and that we consider the status quo of endless occupation to be unsustainable, unjust and harmful to the interests of both our countries,” Bayroff said.

Also attending the Biden-Rivlin meeting Monday were national security adviser Jake Sullivan and other officials, as well as the Israeli ambassador to the U.S., Gilad Erdan.