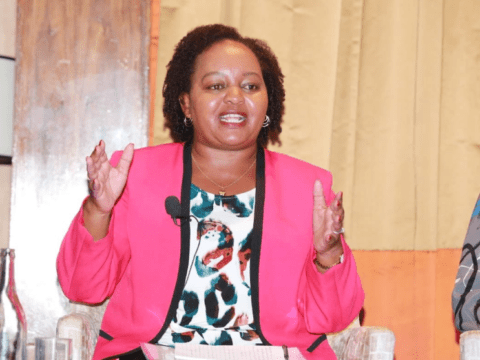 Kirinyaga Governor Anne Waiguru was on Thursday yet again summoned to the Ethics and Anti-Corruption Commission (EACC) Nairobi offices for questioning over alleged misappropriation of public funds, to a tune of Ksh.52.8 million.

She had been called in over a questionable allocation of Ksh.52.8 million to settle a pending bill, approved by the County Assembly and her Cabinet.

“This pending bill was for issuance of title deeds in South Ngariama, and what they are alleging is that we shouldn’t have deliberated on this issue at the cabinet…,” said Waiguru after walking out of the revolving door at integrity centre.

The governor insisted the summons were crafted to intimidate and blackmail her into submission, after seemingly taking a different political direction in the 2022 State House succession game plan.

“This is just an issue of harassment, it is intimidation, it is political, they wanted me here, and you there with camera… the same people who were behind my impeachment, it is because I hinted that I am reconsidering my political position and its unfortunate…,” she added

The Kirinyaga Governor has been a defender of the March 2018 handshake between President Uhuru Kenyatta and ODM leader Raila Odinga and a fierce critic of Deputy President William Ruto. She attributes her woes to her latest position, that the Jubilee Party has lost support in the mountain, and she is consulting Kirinyaga voters on the political path to take.

“At this point its premature to say where we will be going, let me continue consulting and talking to other people and leaders and then we will decide on the next political move…,” she said.

“We are courting Anne Waiguru as ANC. We don’t want her intimidated by anyone, we know its because of politics and that it is very difficult to sell a certain party and a certain individual who is standing as a candidate…,” said Savula.

Some political pundits have linked waiguru with a likely shift to Ruto’s UDA. However, on May 25 this year, she met ANC leader Musalia Mudavadi at his lavington offices even as her political destination a guarded secret.

“Elections are 11 months away, we have political deadlines, and those deadlines require that within certain times you should have announced the seat you are vying and the party,” said the Governor.

EACC has recommended prosecution of Waiguru over a Ksh.10.63 million imprest collected for a foreign trip that allegedly never materialised.