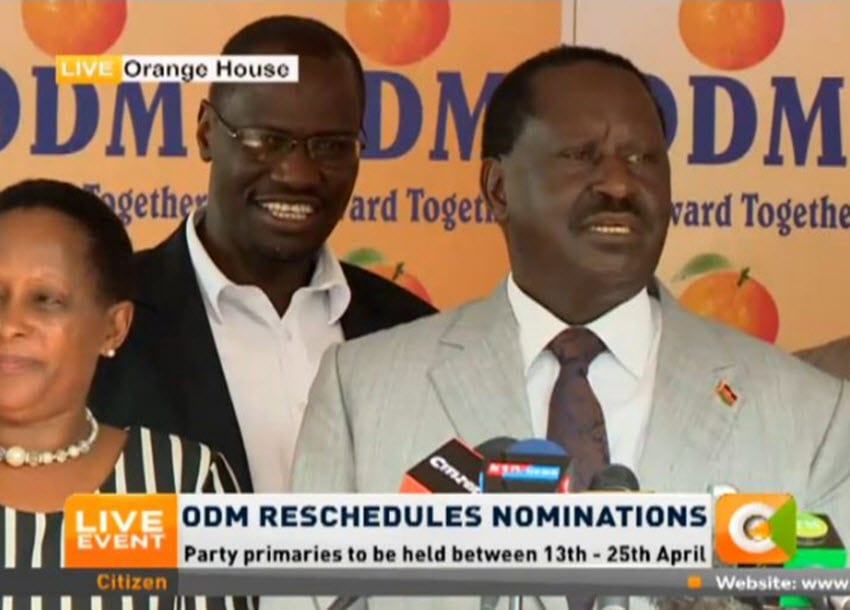 Speaking to the press after a meeting with the party’s Central Management Committee chaired by Party Leader, Raila Odinga, the leaders were asked to appear in person and unaccompanied by their supporters before the ODM disciplinary committee on Monday.

Odinga condemned the violence witnessed in those areas saying that his party will not allow any hooliganism during the party primaries.

In Migori, trouble ensued when hooligans, believed to be Migori Governor, Okoth Obado, supporters stormed the function disrupting the proceedings.

Stones and water bottles were hurled at the ODM leaders, forcing them to scamper to safety.

“We will not allow acts of hooliganism,” said Odinga.

The party further called off party primaries that were to kick off starting Saturday 8th April 2017 in Busia and Bungoma.

Odinga intimated that the electoral body IEBC had forwarded a timetable of party primaries to them which he said they appreciate.

According to ODM Secretary General, Agnes Zani, nominations will now be held from 13th to 25th April.

Zani further indicated that the party’s nominations will still be staggered as before starting with those in Busia, Bungoma and Machakos Counties.

This comes just hours after the Independent Electoral and Boundaries Commission (IEBC) declared any party primaries conducted before April 13 illegal.

IEBC chair, Wafula Chebukati, said that no political party should conduct its primaries before the set timelines as the poll body needs to gazette the names of contestants for various positions.

ODM had scheduled its primaries to run from Saturday, April 8 with Bungoma and Busia counties set to conduct their nominations Saturday.

On the NASA acronym, Odinga dismissed a looming crisiss saying there is no problem.

This comes just hours after an NGO, the Northern Advocacy for Sustainable Agriculture acquired trademark rights from Kenya Property Industrial Institute over use of NASA.

The NGO moved to court last week seeking an injunction to stop the opposition from using the acronym NASA.