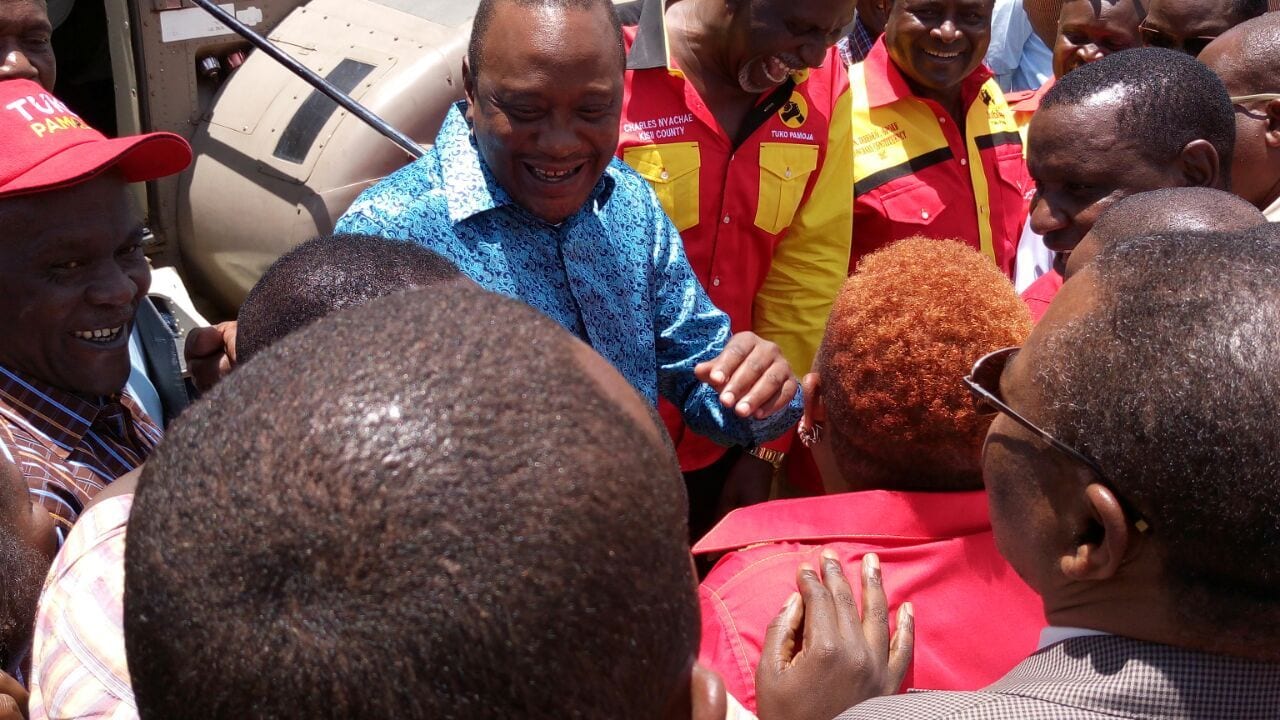 President Uhuru Kenyatta this afternoon wrapped up his visit to Nyamira and Kisii counties with a call to residents to rally behind the Jubilee Party.

The Jubilee leader said his party is confident it will form the next government because it has served all Kenyans honestly.

He urged the residents of the two counties to join the side that cares about the interest of their communities and ignore the opposition, which thrives on insults and incitement.

The Head of State described members of the Abagusii people as very practical people who make informed choices.

He said in the 2013 election, the Abagusii voted for the opposition because they thought the former Prime Minister Raila Odinga and Vice-President Kalonzo Musyoka would win the election.

“Last time, you looked at the other side and you saw a prime minister and a vice-president. On our side, you saw two young men headed to a white man’s court and you went with the old men,” said President Kenyatta

He added: “If we defeated them then when we were in the wilderness, do you think they can pose any challenge to us today with the unparalleled development record as a government?”

The President, who spoke at Gusii Stadium and in several other rallies in Kisii County, said the opposition is known for issuing insults instead of engaging in discussions that can benefit Kenyans.

He said he was certain that the opposition, as has become their tradition, will come to Kisii and Nyamira to ‘respond’ to him with their ‘’usual insults.’’

But he called on the residents to ‘’listen and laugh’’ at the insults the opposition leaders will utter. He urged them to use their intelligence to decide who to support.

“Vote for the right people,” said the President when he addressed serval rallies and launched development projects in Kisii earlier in the day.

Among the roads whose construction President Kenyatta launched are Kebuku- Nyangusu-Nyamache-Nyachoki road at a cost of Sh1.1 billion.

Kisii Senator Chris Obure who is vying for the Kisii Governor’s post said he has defected to Jubilee because he had found that the opposition does not care about the interest of the people.

Obure said the people of Kisii do not want to be left outside government.

Kisii Deputy Governor Joash Maangi said he has decided to back Obure for the Governor’s post to ensure Jubilee clinches the position.

While in Kisii, the President first held a meeting with leaders at Nyantore grounds where he also attend a town hall meeting with youth before proceeding to launch development projects.