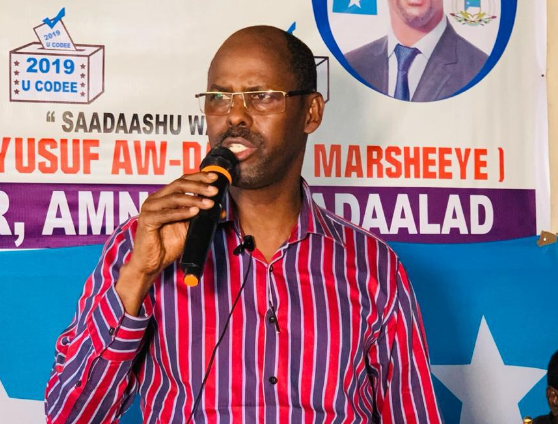 Mohamed Yusuf Aw-Dahir, one of the top candidates in the upcoming election in the Somalia state of Jubaland has vowed to strengthen security in the region, which has in the past been highly affected by terror threats.

Aw-Dahir is seeking to unseat Sheikh Ahmed Islam Madobe who wants to retain the presidency.

He enjoys the backing of Jubaland clans that have numerical potential in the parliament composition — kumathe (21 votes), Marehan (19 votes), Harti (07 votes), digil & mirifle (10 votes) and among others.

Aw-Dahir hails from the larger kumathe, while his mother is from the Marehan clan, from which Federal Government of Somalia President Mohamed Abdullahi Mohamed, alias Farmajo, also comes from.

If elected, he has vowed to promised to strengthen the security sector, initiate genuine reconciliation and, peaceful coexistence of the communities in the region.

He has also vowed to create an enabling environment for the private sectoras well as promote economic diversification in the region.

“The implementation of these key elements of our strategy will allow reintegration of the refugees and IDPs and will contribute to the stabilization process to rebuilding the nation,” says Aw-Dahir.

From 2011-2016 Aw-Dahir worked with UN/FAO as a regional Food Systems Economist for the Near East and North Africa Regional Office in Cairo and currently as a Senior Officer (Program and Partnership) for the Eastern Africa Subregional Office, in Addis Ababa Ethiopia.

Also in the race are Abdinasir Seraar, who was Madobe’s former lieutenant at the Ras Kamboni Brigade, and Minister for Transport and Civil Aviation in the Federal government Mohamed Omar .