Jubilee has not done anything worth praising – Raila 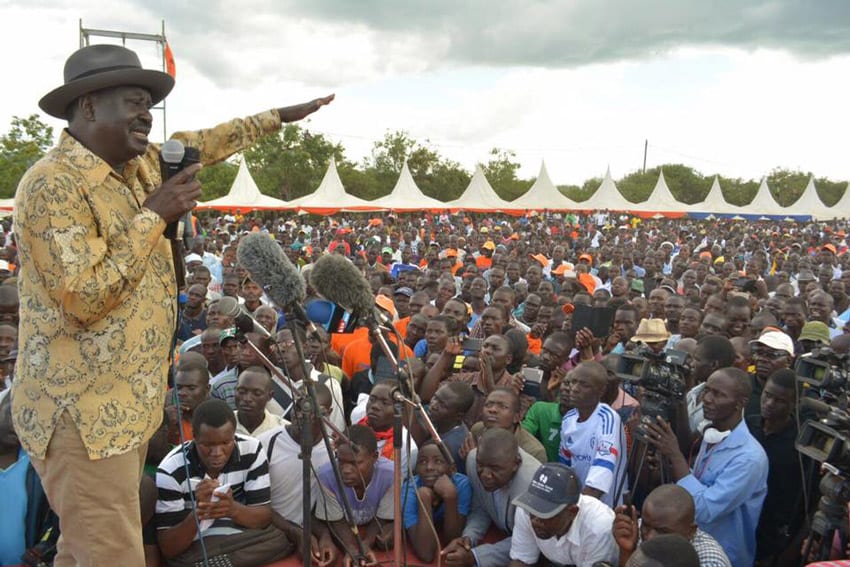 CORD leader Raila Odinga has hit out at Jubilee government over apparent failure to fulfill its pre-election pledges.

Speaking in Homa Bay on Sunday, Raila said that his move to constantly criticize President Uhuru Kenyatta and his government is drawn from its supposed failure to better the living standards of Kenyans, four years after ascending to power.

“Jubilee government has been constantly attacking me over my criticism of their conduct. But the truth is they have not done anything worth praising,” he said in his native Dholuo language.

He claimed that Jubilee government has ‘excelled’ in perpetuating corruption through questionable projects and fraudulent transactions.

The ODM leader faulted those questioning his development record during his time as Kibra MP saying their attempts to supposedly improve the living standards in Kibra were just a scheme to loot.

“They pretended to be interested in improving the conditions in Kibra through the National Youth Service (NYS) yet their real intention was to create an avenue to loot.”

Other speakers at the function, including Mombasa Governor Hassan Joho, called on the residents to register as voters and ensure Jubilee does not get a second term in government.

Prior to the rally, Raila had visited the home of the late Homa Bay Senator Otieno Kajwang at Sikri in Oyugis for his memorial service.

Kajwang, who was considered a strong pillar in ODM, died in November 18, 2014 and was buried 10 days later.

Speaking at the service, Raila said that Kajwang was a great man and always consulted with him whenever there were issues concerning the party with the aim of getting solutions.