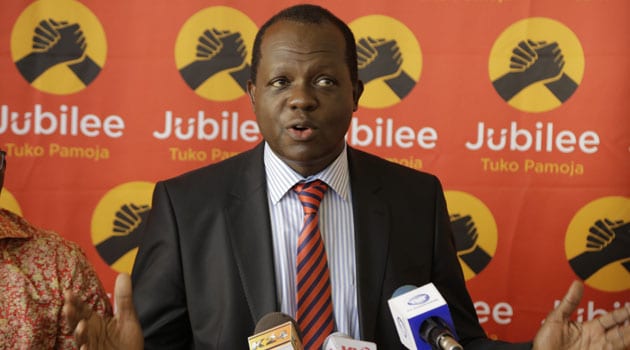 The Jubilee Party has opted out of the Migori Senatorial by-election scheduled for October 8, 2018.

Addressing the press on Sunday, Jubilee Secretary General Raphael Tuju said the party’s leadership had resolved not to field a candidate as one of the ways to support the building bridges initiative of President Uhuru Kenyatta and opposition chief Raila Odinga.

“The National Management Committee unanimously decided that the party will not field a candidate during the forthcoming senatorial by-election in Migori,” said Tuju.

“This is in keeping with a similar decision we had made with respect to the Kitui-West by-election and it also supports the building bridges initiative.”

The seat fell vacant following the death of Senator Ben Oluoch who succumbed to throat cancer on the 19th of June at the MP Shah Hospital in Nairobi.

Jubilee also opted out of the Kitui-West by-election in March and instead backed Wiper Party candidate Edith Nyenze, who successfully vied for the seat to succeed her late husband Francis Nyenze.