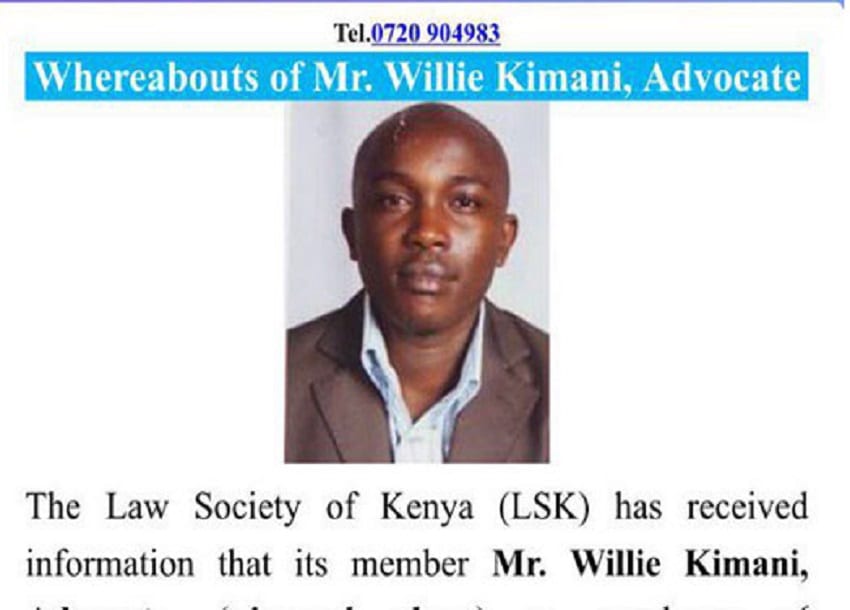 Judges and Magistrates have expressed shock at the gruesome murders of lawyer Willie Kimani, his client Eric Mwenda and driver Joseph Muiruri.

Under Kenya Judges and Magistrates Association, they are now demanding for swift investigations into the matter, adding that they expect the Directorate of Criminal Investigations to ensure justice is served.

Association Secretary General Brian Khaemba said the brutal killings are meant to intimidate lawyers and judges handling the case pitting the deceased lawyer and his client against three police officers.

Speaking at Milimani Law Courts flanked by Association President justice Hedwig Ong’udi, Khaemba expressed interest in being enjoined in the case by LSK against the police force over their probe into the murders.

On Friday, lawyers demanded the resignation of Interior CS Joseph Nkaiserry and the Inspector General of Police Joseph Boinnet over the alleged involvement of three police officers in the murders.

Speaking at Milimani Law Courts, Law Society of Kenya chair Isaac Okero warned that lawyers will petition for the removal of Nkaiserry, should he fail to step aside immediately.

Okero also demanded the interdiction of the three officers suspected to be involved in the murders. The officers are in police custody, and their firearms confiscated.

LSK intimated that all lawyers countrywide will down their tools from Monday next week for a full week to protest the brutal killing of their colleague.

They will also wear purple ribbons to mourn the fallen advocate.