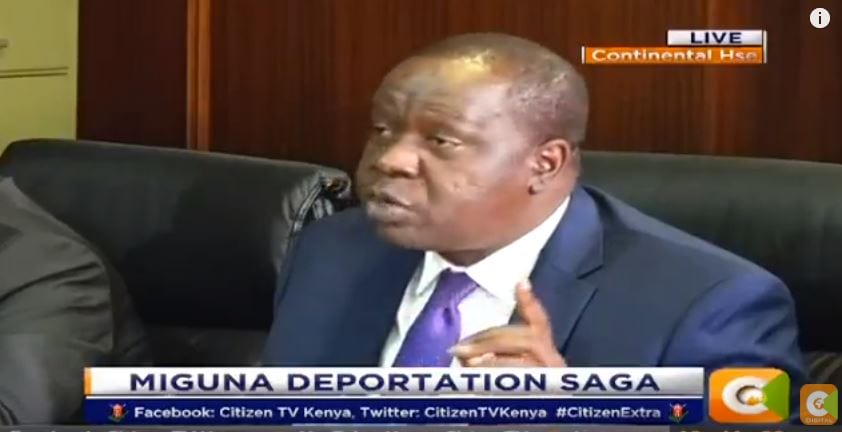 The CS who appeared before members of Parliament on Tuesday, said Justices George Odunga and Roselyn Aburili gave orders in the Miguna deportation cases without granting the State a fair hearing.

“In three years, a single individual got nearly 30 court orders. He could even walk in today demanding that all Cabinet Secretaries commit suicide and it will granted,” Matiang’i retorted.

“You can actually sell poison in this country, all you need to do is to go to court and obtain a court order,” he added.

Miguna’s lawyers had earlier claimed that police and State officials frustrated them when they attempted to serve them with court orders.

However, Dr. Matiang’i alleged that there was a conspiracy between the Judiciary, the attorneys and the civil society, to cripple the Executive.

“This isn’t about the Judiciary. It is about a clique of judicial officers who have gotten into unholy relationship with activist lawyers, the Opposition and civil society; with the intention of humiliating and stalling the government; making it impossible for the State to perform its work,” Dr. Matiang’i said.

The three State officials, who were fined for not releasing fiery lawyer Miguna Miguna to appear in court, have maintained their innocence saying they were not served a single order.

They now want the judges involved to be sanctioned for sentencing them in their absence. “We are dissatisfied with how this thing was handled and have filed a complaint with the office of the AG and JSC on the matter,” said Dr. Matiang’i.

Since January, State officers have ignored over ten court orders on various cases among them the Miguna deportation debacle and the switch-off of four TV stations in the country. This has earned Dr. Matiang’i, Police IG Boinnet and other officers the tag ‘Lords of Impunity’.

One of the judges cited during the Tuesday session, Justice Odunga, has in the past had altercations with State officials, when he served at the Judicial Review Division of the High Court.

He has since taken up a new assignment as the Presiding Judge in Machakos County.