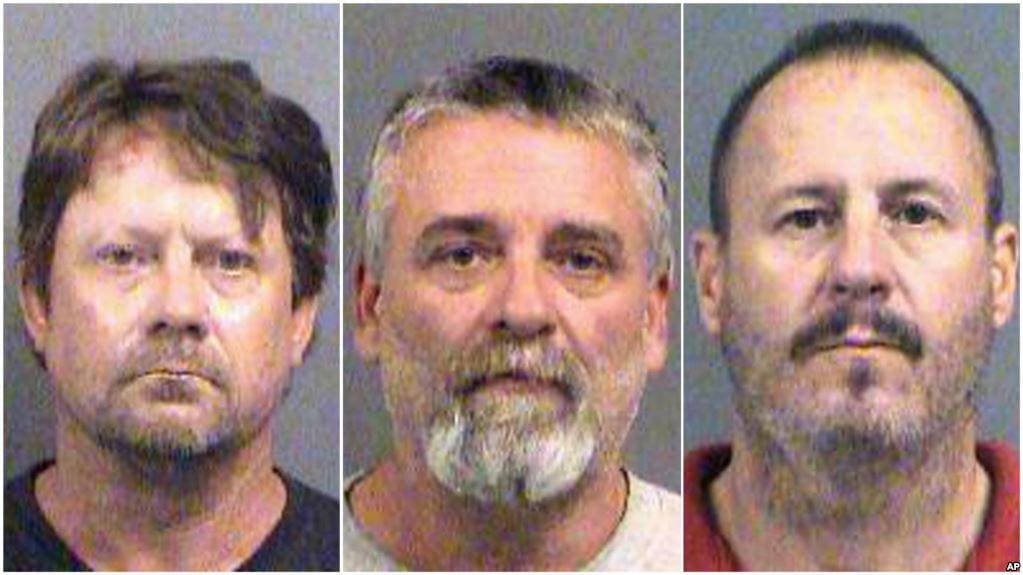 Three militia members convicted of taking part in a foiled plot to massacre Muslims in southwest Kansas were sentenced Friday to decades in prison during an emotional court hearing in which one of the targeted victims pleaded: “Please don’t hate us.”

U.S. District Judge Eric Melgren sentenced Patrick Stein, the alleged ringleader, to 30 years in prison and Curtis Allen, who drafted a manifesto for the group, to 25 years. Gavin Wright, who authorities said helped make and test explosives at his mobile home business, received 26 years. The plot was foiled after another militia member alerted authorities.

Melgren dismissed defense attorneys’ request that he take into the account the divisive political atmosphere in which the men formed their plot to blow up a mosque and apartments housing Somali immigrants in the meatpacking town Garden City, about 220 miles (355 kilometers) west of Wichita, on the day after the 2016 election.

“We have extremely divisive elections because our system is to resolve those through elections and not violence,” Melgren said.

Stein’s attorneys have argued that he believed then-President Barack Obama would declare martial law and not recognize the validity of the election if Donald Trump won, forcing militias to step in. Stein’s attorneys noted that during the 2016 campaign, all three men read and shared Russian propaganda on their Facebook feed designed to sow discord in the U.S. political system.

Attorney Jim Pratt told the judge that for years Stein had immersed himself in right-wing media and commentators, who normalized hate. But Melgren was openly skeptical, telling Pratt: “Millions of people listen to this stuff, whether it comes from the left or the right.”

Prosecutors presented video testimony from some Somali immigrants who were the targets of the bombing. In one clip, Ifrah Farah pleaded: “Please don’t kill us. Please don’t hate us. We can’t hurt you.”

Allen, 51, choked up as he addressed the judge, prompting his attorney to step in and finish reading a prepared statement in which Allen offered “my sincere apologies” to anyone who was frightened and asked for their forgiveness. But Stein, 49, apologized only to his family and friends, and the judge noted when sentencing him that, unlike Allen, he had shown no remorse.

Wright, 53, apologized to the court, saying the plot is “not who I am.” He also apologized to the immigrants who lived at the apartment complex. The judge later said Wright’s courtroom statement showed he was still in denial about what he did, adding that he did not buy that there was any remorse on Wright’s part.

The judge told all three men that the planned attack was worse than the Oklahoma City bombing because the Garden City plot was motivated by hatreds of race, religion and national origin.

The Kansas plot was thwarted when militia member Dan Day tipped off authorities to escalating threats of violence. He testified at the men’s trial last year that Stein started recruiting others to kill Muslim immigrants after the June 2016 mass shooting at the Pulse nightclub in Orlando, Florida, by a gunman who had pledged allegiance to the Islamic State group.

Recordings that prosecutors played for jurors last April portrayed a damning picture of a splinter group of the militia Kansas Security Force that came to be known as “the Crusaders.”

“These defendants planned to ruthlessly bomb an apartment complex and kill innocent people, simply because of who they are and how they worship,” FBI Director Christopher Wray said.

The sentencing hearings for the men came a day after two members of an Illinois militia known as the White Rabbits pleaded guilty in the 2017 bombing of a Minnesota mosque, admitting they hoped the attack would scare Muslims into leaving the U.S. No one was injured in that attack.