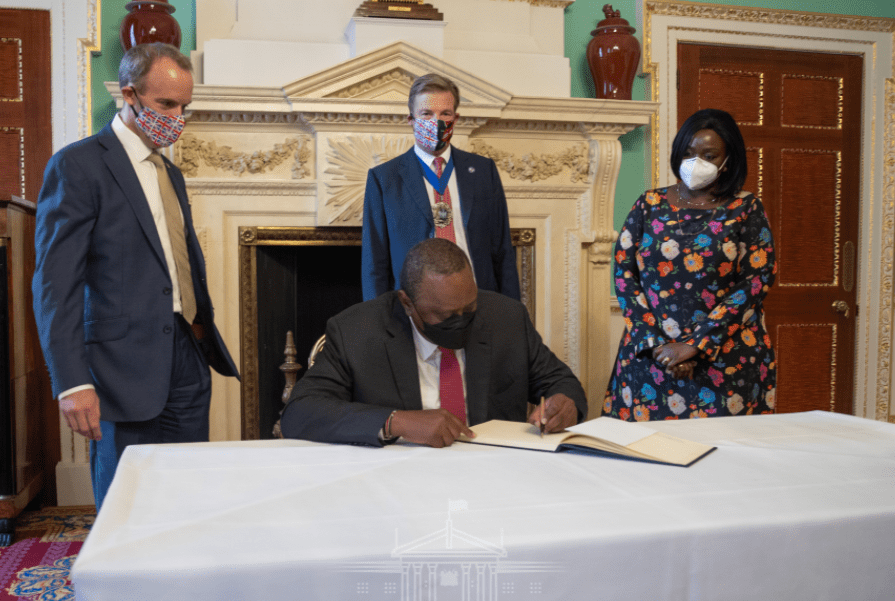 President Uhuru Kenyatta has invited United Kingdom (UK) investors to tap into emerging business opportunities in Kenya, saying the country remains one of the most attractive investment destinations in Africa.

“I am also happy to announce that discussions have commenced between Kenya’s National Treasury and Planning and the United Kingdom’s Export Finance (UKEF) to unlock financing for British companies pursuing PPP investments in Kenya,” President Kenyatta said.

The Head of State made the invitation during business forum hosted by UK Foreign Secretary Dominic Raab and the Lord Mayor of the City of London William Russell at Mansion House, the Lord Mayor’s official residence.

President Kenyatta announced Kenya’s ambition to deepen its cooperation with the Foreign Commonwealth Development Office (FCDO)  through a Memorandum of Understanding (MoU) to be formalized between the country’s National Treasury and the Private Sector Infrastructure Development Group (PIDG).

“The cooperation with Foreign Commonwealth Development Office is for a possible funding, through Private Sector Infrastructure Development Group, of 1.3 million US Dollars to support early and transaction-stage PPP project development activities in Kenya,” the President said.

During the event, a cooperation pact was signed between the Nairobi International Financial Centre (NIFC) and TheCityUK, a London business lobby group. The partnership agreement will the two entities to collaborate in business and investment promotion.

“The CityUK represents key financial and professional services firms in the UK and this partnership creates a framework for those institutions to deploy and share their expertise with their counterparts in Kenya and regionally. This is an important partnership, which my administration supports wholeheartedly,” the President said.

The Head of State noted that the NIFC is a platform established to make it easier and more attractive to invest in Kenya.

“It is an initiative that was conceived when I was the Minister for Finance; and although it has taken a while to get here, I am pleased to say that it will soon be open for business,” the President said, adding that the centre will prioritise attracting capital and investment into development projects.

It will also focus on attracting green finance for sustainable economic development and investments into fintech and new areas of innovation by leveraging on Kenya’s vibrant fintech ecosystem.

The President said NIFC is tailored to support global financial and professional services firms that want to establish their regional headquarters in Africa to efficiently and conveniently set base in Nairobi.

President Kenyatta informed the business forum in that Kenya’s economy is projected to rebound strongly from the slowdown occasioned by Covid-19, with an estimated economic growth of over 7 percent.

“We have also shown resilience during the last year, with our economy amongst the least affected globally. Further, underlining our stability is the fact that economic growth has averaged almost 6 percent over the last decade,” the President told London’s captains of industry.

Prudent macro-economic management, the President said, had fostered a predictable business environment, adding that the Kenya Government is implementing a fiscal consolidation plan so as to keep public debt within sustainable levels, while rationalizing public expenditure and improving tax administration.

“Our country also stands out as one of the most pro-business in Africa, with the World Bank Ease of Doing Business, currently ranking Kenya the fourth in Africa and fifty-sixth, globally.

“Kenya continues to pursue initiatives aimed at lowering the cost of doing business. Significant investments have been made to improve the quality of infrastructure, with our infrastructure ranked amongst the best in sub-Saharan Africa,” President Kenyatta said.

On climate change, President Kenyatta said Kenya is playing its part in developing the framework to encourage the growth of green finance, including having developed a comprehensive framework for the issuance of Green Bonds.

“I wish at this point to thank the UK Department for International Development for supporting our National Treasury and our Capital Markets Authority to develop this important framework,” President Kenyatta.

The UK Foreign Secretary announced Shs 5.2 billion of UK Aid to be matched by Shs 3.5 billion of private investment to finance 10,000 green affordable homes in Kenya.

“These new homes will be energy and water efficient properties for low and middle income families, and will contribute to Kenya’s goal of building 500,000 new affordable homes by 2022,” Mr Raab said.

Also present were State House Deputy Chief of Staff Ruth Kagia, and Kenya’s High Commissioner to the UK Manoah Esipisu as well as his UK counterpart in Kenya Jane Marriott.