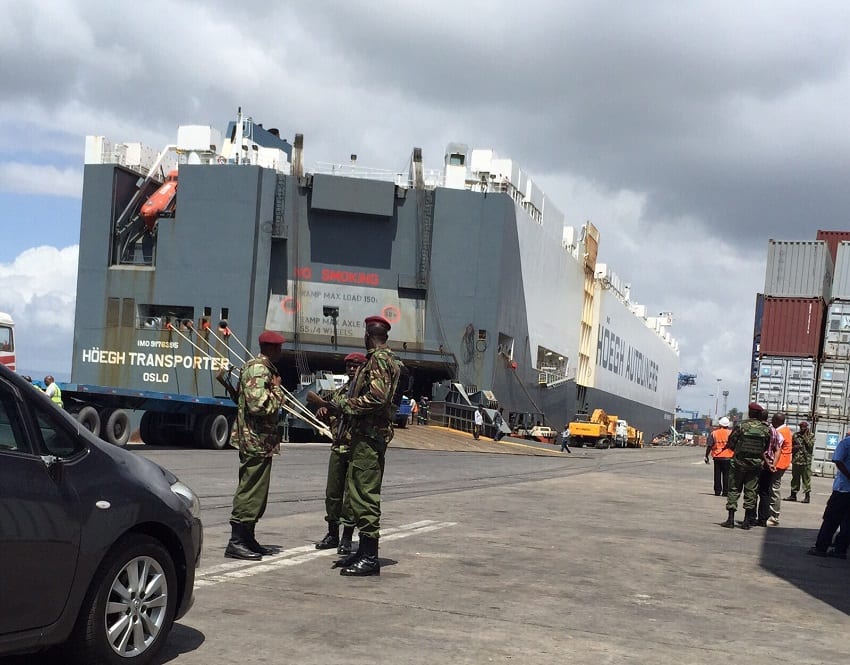 The controversial vessel impounded at the Mombasa Port suspected to have been transporting illegal firearms and drugs has finally been released by the government.

The vessel belonging Hoerge transporters has been at Kilindini port for the last 8 days under heavy security guard as it was being sweeped by special police teams.

The vessel arrived from Mumbai in India only for security agents led by recce and GSU squads to take over the port locking out all port employees and local police.

Speaking on Saturday, vessel owner’s Lawyer Cliff Ombeta confirmed they will be moving to court Monday to sue government to demand compensation for time wasted.

Ombeta says the vessel, with all 20 crew members on board, was secretly released at 10.47 PM on Friday night without explanation on the drugs and illegal firearms smuggling claims.

This comes after United Nations claimed ownership of the weapons aboard the ship.

UN on Thursday said that the weapons recovered in MV Hoegh, the ship that was held at the port of Mombasa over suspected content, are legitimately acquired.

Confirming the recovery of the cache of weapons, Inspector General of Police Joseph Boinett said police also recovered substance suspected to be drugs.

The UN also expressed its disappointment that the Kenyan authority went ahead to search the vessel without involving the humanitarian body.

For the last eight days, MV Hoegh transporter has been held at Birth 13 after Kenyan security personnel were tipped of its contents as it docked at the Kilindini harbour.

According to a statement sent to newsrooms late Thursday from the United Nations Information Center, the arms are legitimately owned.

“The weapons found in the shipment by the Kenyan authorities were part of a legitimate and declared contingent owner Equipment cargo packed in Mumbai, India with destination the Indian Battalion of MONUSCO, DRC,” read the UN statement in part.

UN, however, admits: “The weapons were declared in the bill of lading but not in the manifest.”

The weapons were recovered inside the UN amoured carriers and according to the statement, “it is normal practice for weapons attached to the APC’s to be dismantled and placed inside the carriers in order to avoid damage whilst being shipped.”

“It is unfortunate that the Kenyan authorities inspected the cargo without a UN presence which runs contrary to established protocol and provisions surrounding privileges and immunities.”

The international body, however, said it was astonished by the claims that drugs were recovered from the cargo.

“We are also aware of the disturbing allegations that drugs were also found on the vessel. This is currently being investigated by the responsible authorities.”