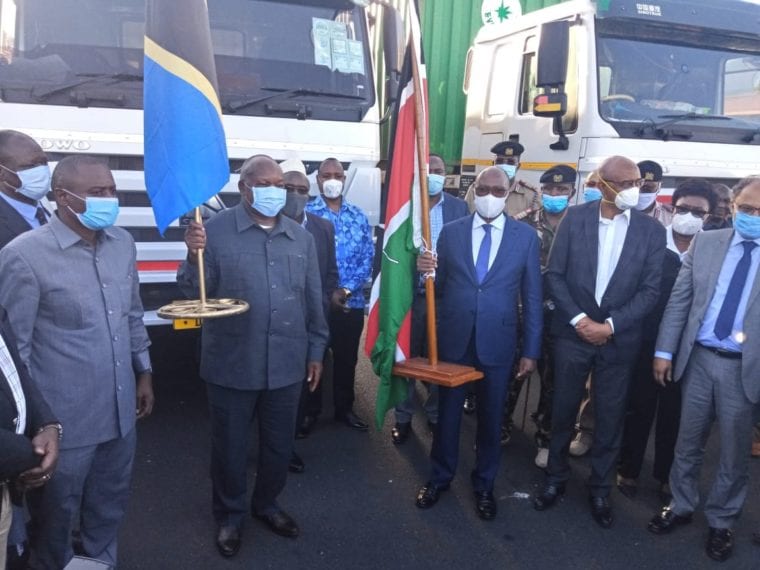 Kenya and Tanzania have struck a deal to make public data on the COVID-19 status of truck drivers without mentioning nationality of those who test positive.

A statement signed by Transport Ministers James Macharia (Kenya) and Issack Kamwele (Tanzania) said the data will be submitted to the competent authority through diplomatic channels for necessary measures.

“Truck crew to be tested before the commencement of their journeys at point of origin using WHO standards and be issued with a 14-days COVID-free certificate by the competent authority which shall be mutually recognised,” the two leaders said.

Each vehicle will only be allowed to carry up to three crew members: each partner State will Gazette conducive places for the truckers to stop and rest.

The crew left behind are to be treated according to WHO guidelines.

Further, both States have agreed to commit to revive and operationalise the Ujirani Mwema cross border meetings.

Citizens who undertake agricultural activities on either side of the border will be allowed access to their farms subject to being identified by the local leaders.

For weeks, trucks were stalled at border crossings — with trucks sometimes stretching back hundreds deep at some points.

Truck drivers began to be seen as high-risk COVID-19 carriers after some cases were traced to them.

Tensions had escalated between Tanzania and Kenya over recent days.

Kenya’s ambassador to Tanzania, Dan Kazungu, attempted to ease the situation on Tuesday, saying at a news conference that leaders of the East African Community (EAC) were working together to address the region’s trucking industry problems.

But on Wednesday, a day after Kenya announced the return of more than 180 foreigners to Tanzania because of positive COVID test results, a Tanzanian regional official accused the Nairobi government of faulty testing.

Mrisho Gambo, a commissioner in Tanzania’s northern Arusha region, said in a statement that 19 truckers who had tested positive in Kenya subsequently had negative results after retesting in his country.

He accused Kenya of “a deliberate sabotage strategy” against tourism in his country, according to local news reports.