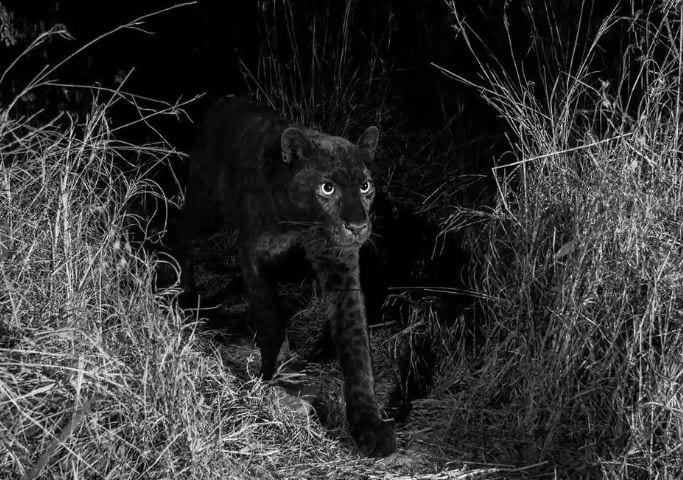 Kenyans on social media have expressed outrage at reporting by international media about the sighting of a ‘black leopard’ in Laikipia for the first time in 100 years.

According to the media outlets, British photographer Will Burrad-Lucas captured the animal in its element at the Laikipia Wilderness Camp last month.

Kenyans, however, say the animal – or, at least, similar ones — have lived in the area for years and have even been photographed previously.

Taking to Facebook, conservationist Mordecai Ogada stated that he and his colleagues spotted a similar animal in Ol Maalo, Laikipia, during his Masters Studies research in early 2001.

An article published by the Daily Nation further added that one of their former photographers, Phoebe Okall, spotted and captured on camera a black leopard at the Ol-Jogi Game Reserve in Laikipia on August 27, 2013.

These, among other sightings reported by Kenyans on social media, have elicited mixed reactions on why the previous documentations of the rare animal were not taken seriously.

The uproar has also stirred a racial debate on whether an invention is ever only considered tangible enough for reporting by international media if it is made by a foreigner as opposed to a native.

Below are some of the reactions by Kenyans on the reporting:

Eh… actually @dailynation photographer @okallkinya1 got a picture of a black leopard in Ol Jogi Wildlife Conservancy in 2013 while on a news assignment via @bonifacemwangi https://t.co/oQXnXNfuae

Not to mention that locals have been spotting black leopards over the last 100 years…how else did the photographer know where to go (they even helped him with setting the camera traps per his account) https://t.co/8MfT9ZSpxA

I have actionable intelligence that sightings and photographs had been taken in 2013 by our very own #PhoebeOkall of @ntvkenya pic.twitter.com/CM1b3kEsqV

Saw that elusive #BlacKPanther story in 2010, it has various local names, in the Abadares /Kirinyaga it's known as "kìrùmi" (an outcast of the leopard), In Gusii "Ekworo", In Wajir North, the Somali name is "Kitowbaar" & the Borana name it "Mordee", "Gadudana", "Daba-ada" … pic.twitter.com/yRGeiUmmdu

This is complete nonsense from @NatGeo @NatGeoMag Black (melanistic) leopard was, for example, regularly seen at #LewaDowns Conservancy in early 2000s, and were confirmed sightings of others elsewhere in #Kenya. Rare – yes. ‘First time in 100 years’? Pull the other one.

In 2013 @dailynation photographer Phoebe Okall @okallkinya1 shot this picture of a black leopard in Ol Jogi Wildlife Conservancy. She was on a news assignment with her basic gear, spotted the cat and shot the pic. 2013. First time in almost 100 years goes to @okallkinya1 then. pic.twitter.com/FngtHiI6OO

These leopards have been there for as long as i can remember. When i was a kid, there was one that killed our goats. It is no new discoveries. We as laikipians are used to them even

It was also spotted last year September, but somehow it’s been “Discovered” now a book will be published and monies earned to “Protect the species”