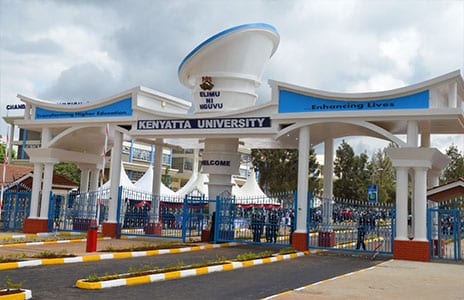 Kenyatta University has been shut down until further notice following two days of student demonstrations.

In a memo issued on Tuesday, the institution’s Vice Chancellor Prof. Paul K. Wainaina stated that the Senate had reached the decision “following disturbances by some students that have led to disruption of lectures and destruction of university property.”

“In view of the foregoing, all students are required to vacate the university premises immediately,” stated Prof. Wainaina.

Kenyatta University Students Association (KUSA) leader Joshua Ayika has, however, advised students to disregard the memo and instead await his address.

The students on Monday engaged police in running battles and caused a heavy traffic snarl up on Thika Road as they staged a protest over welfare issues.

Led by their union boss Joshua Ayika, the learners reportedly demanded the resignation of Prof. Wainaina over what they termed as “historical injustices.”

The students lamented over the early deadline for fees payment, the administration forcefully directing students from Nyayo hostel to use a fly over within the institution among other issues.

They further accused the school administration of suspending fellow students and student leaders on “petty basis” besides charging Ksh.2500 for supplementary examinations.

“Sacking of casual workers without notice, almost 700 workers lost their jobs which is unfair,” read a memo by Mr. Ayika.

“Hiking of graduation fee From Ksh.3500 to Ksh.6000 without our body being informed.”

However, in a rejoinder released Monday evening through the office of the V.C, the administration accused Mr. Ayika of issuing a misleading circular without the concurrence of the rest of the Students Governing Council.

“The University Management apologizes to members of the public who were inconvenienced by the few unruly students who chose violence instead of engaging directly with the university administration through dialogue,” read the statement.

“For purposes of safety and security, all pedestrians including students and staff are expected to use the footbridges at the Nyayo Hostels located on our main campus as well as on the Thika superhighway.”

It further stated: “However, a few students were incited not to use the footbridge on the campus. The footbridges were put up by the Government at a considerable cost for the safety and security of the users.”