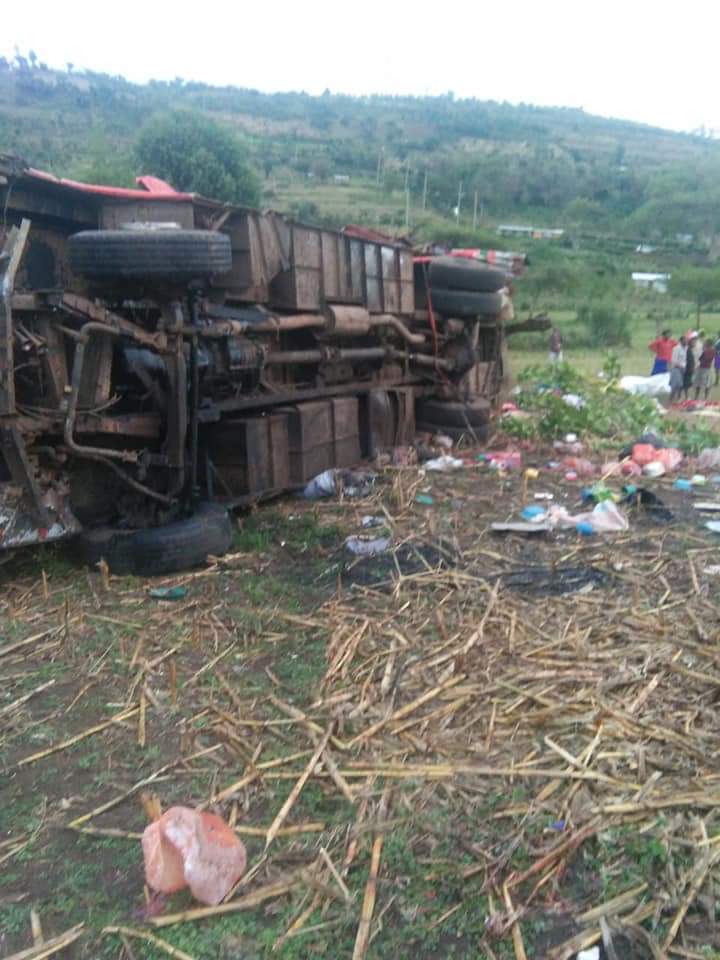 Kenyans on Wednesday morning woke up to the shocking news of a road crash on the Kisumu – Muhoroni highway at Fort Ternan, Kericho County, that has so far claimed 55 lives.

At least 40 people died on the spot during the 4am grisly road accident while more victims who had sustained serious injuries passed on while undergoing emergency treatment at various hospitals around Kericho.

Fort Ternan Police Station OCS Charles Ocharo said the bus belonging to Western Cross Express was heading to Western Kenya from Nairobi when it veered off the road.

Kenyans have since taken to social media to share messages of condolences, expressing their sympathy to families who lost their loved ones to the unfortunate incident.

Below are some of the reactions from Kenyans On Twitter following the accident which coincided with a public holiday meant to celebrate Moi Day:

The unfortunate loss of life at Fort Tenan should prick the conscience of Transport CS James Macharia.

I have observed he neither comments on or bothers about simple matters like road safety. He only deals with big billion-dollar projects like SGR and Affordable Housing.

The CS in charge of Transport would have resigned in shame if this was a country with accountability and responsibility in an incident of such magnitude where a single road accident at Fort Tenan, Kericho County claims over 50 lives!

No words to describe this morning's tragic loss at Fort Tenan. Praying for the families of the departed. May the lord Almighty give you the strength to deal with this painful loss.

And just before the Fort Tenan busses have their licenses withdrawn, can @NPSOfficial_KE @ntsa_kenya explain to Kenyans why a bus not licensed to move at night did just that and went thro many road blocks? We can’t have laws only applicable at convenience. pic.twitter.com/dp122wNaXM

Whenever you use public transportation and get to your destination safely, thank God! Fort Tenan Kericho pic.twitter.com/fk8lNUPy0z

More than 42 people confirmed dead in a bus accident at Fort Tenan, Kericho. The Western Express bus was heading from Nairobi to Kakamega with 52 people on board. This is so tragic. May they rest in peace. pic.twitter.com/C085iZv29D

Condolences to the families of all the people who lost their lives at the Fort Tenan tragic accident, it's devastating. May God grant you comfort and peace and strength to get through this