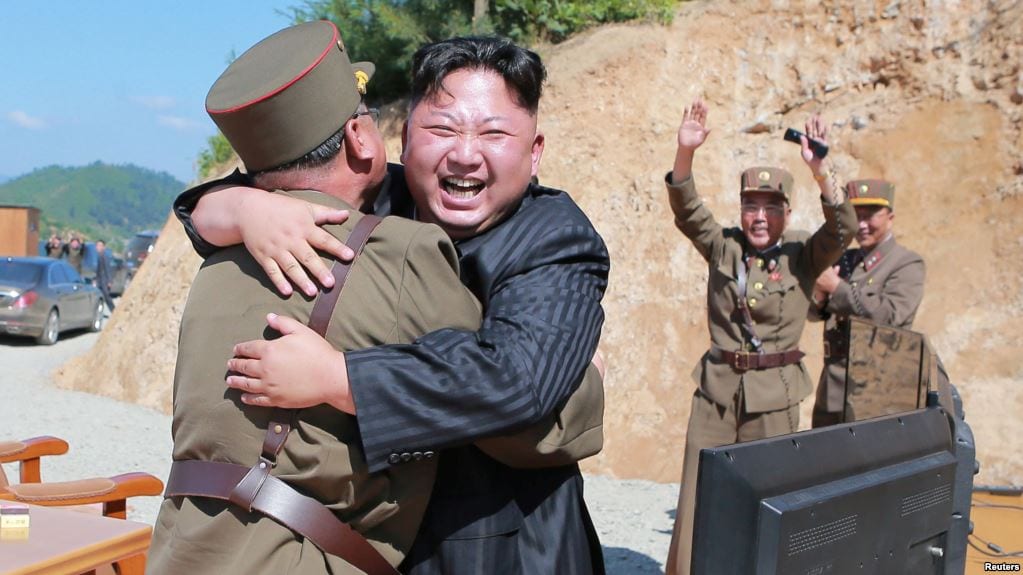 The prospect of reaching any diplomatic solution to the North Korean nuclear threat remains unclear as its leader Kim Jong Un has shown little willingness to compromise with adversaries in Washington or even to engage with allies in Beijing.

“He is a true believer in the hard-line policy, because actually the completion of the nuclear program, the missile and nuclear program, is one of the strongest factors legitimatizing his power, his control of the regime,” said political analyst Choi Kang with the Asan Institute in Seoul.

After taking power in late 2011 following the death of his father Kim Jong Il, there were questions as to whether the young Western-educated North Korean leader would liberalize the longstanding repressive rule of his country, and whether he would be able to consolidate his grip on power.

Yet analysts say Kim has enhanced his image as a strong leader by following in the footsteps of his father and his grandfather, Kim Il Sung, the founding leader of North Korea, with his “byongjin” policy to bolster the country’s nuclear deterrent against the United States, and to improve the economy.

“I think his regime is stable. Moreover, as he declared to pursue a dual economic and nuclear policy, and push for nuclear and ballistic missile development, though the economic side is insufficient, I think he has gained a wide range of popularity from North Koreans,” said Research Professor Suh Bo-hyuk, with the Seoul National University Institute for Peace and Unification Studies.

The Trump administration has been trying to pressure China to control North Korea, but leaders in Beijing have said their influence is limited.

The third generational leader of North Korea has not cultivated friendly ties with China and has repeatedly ignored Beijing’s calls for Pyongyang to refrain from engaging in provocative ballistic missile and nuclear tests and return to international denuclearization talks.

Even though North Korea relies on China for diplomatic protection and 90 percent of its economic trade, Kim has still not met with Chinese President Xi Jinping, in contrast to his father who repeatedly visited Beijing during his tenure.

Kim also ordered the execution of his uncle, Jang Song Thaek, in 2013, who was seen by many as an advocate for reform with close ties to China. This year his government stands accused of orchestrating the assassination of his half brother Kim Jong Nam in Malaysia, who was reportedly under the protection of the Chinese.

“He does not see China as an ally. For him China is a source of potential threat, the only country that can effectively intervene into the North Korean domestic affairs and probably even engineer a replacement of Kim Jong Un,” said Professor Andrei Lankov, a North Korea analyst with Kookmin University in Seoul.

The aggressive North Korean leader seems to have also made the calculation that Beijing values stability over denuclearization and will not impose conditions that would trigger an influx of refugees at the border or the collapse of Kim’s regime, which would lead to a U.S. and South Korea takeover of the entire Korean Peninsula.

“China is so concerned with the possibility of an unstable regime in North Korea. So he says, ‘Here I am. Don’t push me too hard, otherwise there’s going to be instability’ kind of things,” said Choi with the Asan Institute.

Two years ago, North Korea proposed a temporary suspension of nuclear tests in exchange for a halt to U.S.-South Korean military drills. Recently, China and Russia voiced support for a similar freeze proposal, but the United States and its allies have rejected the idea, saying these legitimate defensive measures are not comparable to the North’s threatening nuclear program that has been banned and sanctioned by the United Nations Security Council.

However Kim’s critics, like high level defector Thae Yong Ho, Pyongyang’s former deputy ambassador to Britain, say the North Korean leader uses diplomacy only in support of his long-term goal to develop a strong nuclear arsenal that includes developing intercontinental ballistic missiles that can strike the United States or any target in the world.

“The line of diplomacy or inter-Korean relations should be interpreted in terms of North Korean interests as kind of a tactic to buy time,” Thae said.

Pyongyang responded to U.N. sanctions imposed in March 2016, after North Korea conducted a nuclear test and rocket launch, by declaring his country a nuclear state and accelerating missile and nuclear testing.

The new “maximum pressure” policy imposed by U.S. President Donald Trump to press China to increase and effectively enforce economic sanctions has produced a total ban on the export of coal and other minerals imposed in July that could deprive the North Korean government of more than $1 billion in annual revenue. The United States has also imposed secondary sanctions on a number of Chinese companies accused of doing illicit business with North Korea, a move that has drawn strong objections from Beijing.

But many analysts are skeptical that even imposing a crippling economic blockade would force the North Korean leader to capitulate.

“He probably would be ready to sacrifice farmers, who would starve to death in the remote provinces, but he’ll still keep nuclear weapons, which he believes are vital for his own physical survival,” professor Lankov said.

Diplomacy proponents like South Korean President Moon Jae-in advocate a mix of economic sanctions and dialogue to persuade the Kim regime to eventually adhere to U.N. restrictions in exchange for concessions and security guarantees linked to verifiable denuclearization progress.

But skeptics expect that no matter the costs, Kim Jong Un will continue undeterred with missile and nuclear tests until his military has reached an effective long-range nuclear strike capability level.