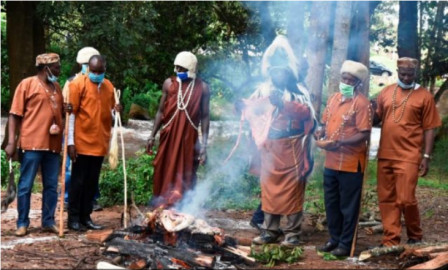 The Kirinyaga Council of Elders has conducted a cleansing ritual in Sagana, Kirinyaga West Sub-county to appease the "Agikuyu god" to allow a road contractor uproot a fig tree that is obstructing construction.

A Chinese contractor associated with the construction sought the elders’ intervention after every attempt to have the trees in the area uprooted failed.

The contractor said they were advised by the locals to seek the indulgence of the elders who immediately embarked on a cleansing ceremony to appease the gods and let the construction work along the Kenol -Sagana – Marwa dual carriage.

The fig tree, which is commonly known ‘Mugumo’ tree, has a sacred significance among the Agikuyu community and the area around the tree is recognized as a place of worship.

Led by the acting Chairman of the council of Elders, Harison Ndambiri, the council conducted the rituals by slaughtering two rams, out of which one, which was unblemished, is burned and the other consumed by the elders.

For the ritual, the elders were donned in their brown casual attire.

Ndambiri said the exercise was necessary in order to appease the forefathers and allow the construction work to proceed uninterrupted.

Besides sprinkling the area with blood from the animals, the elders also planted three trees besides the area, which they said, would replace the shrine.

The Secretary of the Council, Joseph Muriithi, said the fact that smoke went straight up before circling around the trees, meant that the gods approved of the construction.

According to Mr.  Muriithi, the shrine has been in existence for over 600 years and only tales are told of people who were attacked by the gods for interfering with it.

The dual carriage under construction would ease transportation and assist in decongesting traffic along the section of the road.

The 84-kilometer dual carriage worth 14 billion is set to be complete in June 2022 and will help connect the Northern Corridor from Nairobi to the Lapsset Corridor in Isiolo.