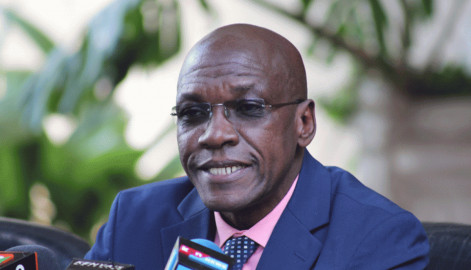 Speaking Thursday morning on Citizen TV’s Day Break show, Khalwale claimed that the violence was well choreographed and that the police were in full knowledge of the incident.

“When you see clearly the police officers sit as the Orange Democratic Movement mobilizes youth… then the police watch the mobilization going on, the people who are leading the mobilization are actually employees of the County Government of Kisumu,” said Khalwale, citing a video clip he claims he saw of the alleged mobilization.

The former senator went ahead to dismiss the National Police Service’s reactions to the incident, terming them as incompetence.

“Immediately the violence happens, even before the policeman does a single minute of investigation he releases a comprehensive statement on what he wants Kenyans to believe took place. That kind of incompetence should not be tolerated at all on the part of the police,” stated Khalwale.

“This was choreography; something that was worked out clearly, there was an assurance that the police will look the other side if things start looking funny,” he added.

Khalwale further called out ODM leader Raila Odinga for his silence on the matter, saying he should have come out to condemn the chaos.

“I want to thank ODM Party Executive Director Oduor Ongwen he came out very well that whether it is through connivance with his party or without, it is something that must be condemned. But he is too low the ladder, the person who should have condemned that violence is none other than the former Prime Minister Raila Odinga,” said Khalwale.

Following Wednesday’s chaos at the DP’s rally which saw his convoy stoned, the National Police Service (NPS) issued a statement saying the violence was due to a clash between two groups on sharing of cash handouts.

The DP’s camp, however, refuted NPS’s claims, accusing the police of negligence.

"The statement by the National Police Service, which carelessly profiles people in regrettable terms, underscores the fact that they had intelligence on the criminal conspiracy to perpetuate lawlessness in broad daylight, and ample opportunity to stop it and facilitate a peaceful event, but consciously opted to engage in political mischief instead.

At no point was there deployment of campaign finances as alleged by the police. The police should not play around with people's lives or property. Just do your job," Ruto's Communication Secretary David Mugonyi said in a statement.

ODM leader Raila Odinga has since come out to speak on the incident, distancing himself and his party from the chaos.

Speaking in an interview with Musyi FM Thursday morning, he claimed that neither he nor ODM had a vested interest in DP Ruto's rally, including who chose to attend.

He added that prior to the DP's visit, the ODM Kisumu branch had issued a statement saying that Ruto was free to visit and endear himself to the voters.