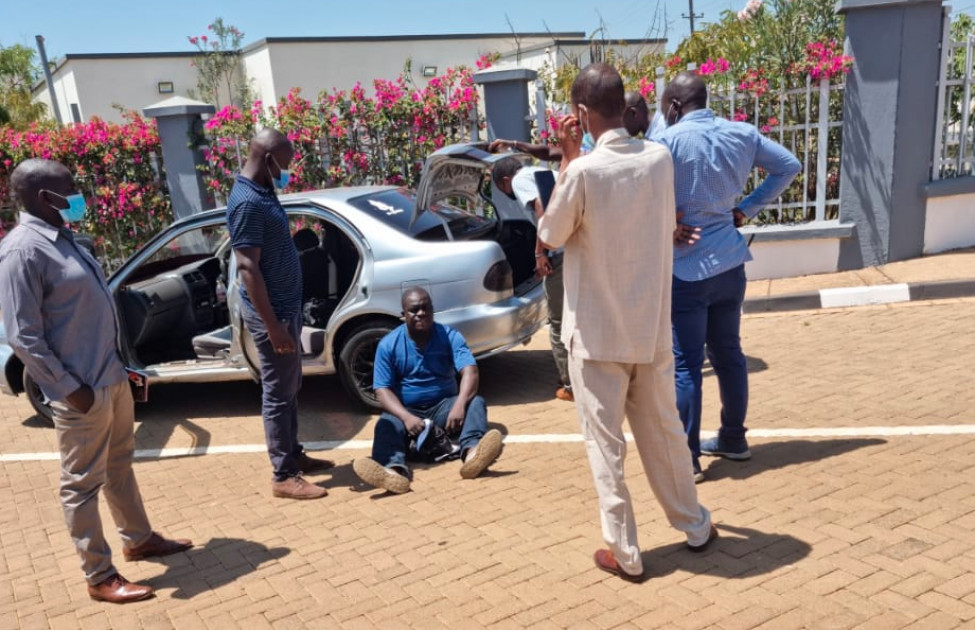 Wilson Aminda (seated) as he was being arrested.

One person has been arrested by DCI officers in Kisumu in connection with the chaos in Kondele last week, which saw deputy president William Ruto's motorcade stoned and several vehicles vandalized.

Wilson Aminda, a Kisumu county law enforcement officer, was photographed carrying stones among a crowd of unidentified youth in pictures that went viral on social media.

Various leaders have condemned the chaos since last week, urging Kenyans to exercise political tolerance as political hopefuls crisscross the country to popularize their campaigns.

Aminda is detained at the Kondele police station and is expected in court later on Tuesday to be charged with malicious damage of property and incitement to violence.

On Wednesday, November 10, rowdy youth in Kondele area of Kisumu pelted Ruto's convoy with stones as he tried to engage residents, leading to police intervention that saw the crowds dispersed with tear gas.

Even though there were no reports of injuries sustained in the chaos, a number of cars' windscreens were smashed and their side mirrors broken.

The National Police Service (NPS) thereafter issued a statement saying the violence was due to a clash between two groups on sharing of cash handouts.

The DP’s camp, however, refuted NPS’s claims, accusing the police of negligence.