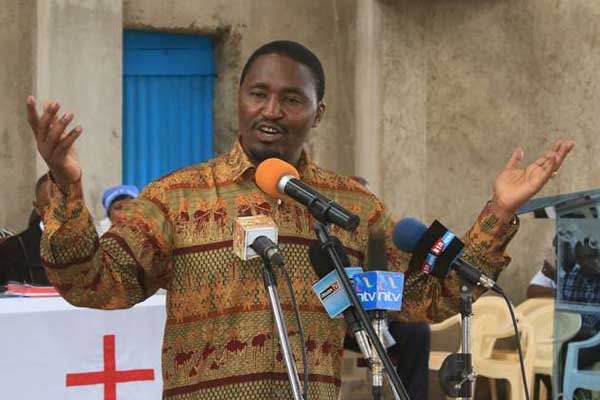 Agriculture Cabinet secretary Mwangi Kiunjuri has come out to defend himself from allegations of creating an artificial maize shortage in the country to necessitate importation.

Speaking on Sunday at Kahira Ini Church in Mathira, Nyeri County, Kiujuri insisted that the country does not have enough maize, adding that the shortage is pushing prices of flour up.

He further claimed to be a victim of political witch-hunt in the ongoing maize saga that has seen leaders from maize-growing regions of Western Kenya demand for his resignation.

He said the decision as to whether there will be imports will be made by the Cabinet, adding that Kenyans will continue to suffer as the price of maize flour could hit Ksh.150 in a month’s time.

Laikipia Senator John Kinyua, who was at the event, defended the Agriculture CS saying Kiunjuri is working to ensure that maize flour remains affordable as per the president’s wishes.

On his part, Mathira MP Rigathi Gachagua said Kiunjuri should not be victimized or intimidated.

He challenged the president to order the cabinet to issue a statement clarifying whether the maize importation stand is a government policy.

Nyeri county MP Rehab Mukami also said there is need for maize importation as the prices of maize have gone up.

The politicians demanding the resignation of Kiunjuri claimed the CS was sponsoring a coup against farmers to reward traders.

While Kiunjuri claimed the country has a deficit of 19 million bags to be plugged through imports, Wekesa claimed only two million bags are required.