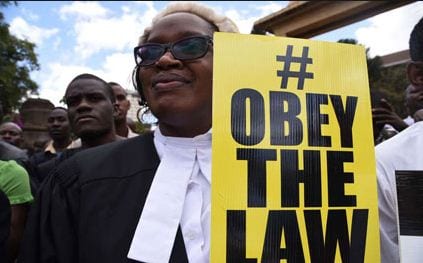 The Law Society of Kenya (LSK) has hit back at the Director of Criminal Investigations(DCI) detectives over the arrest of  lawyer Tom Ojienda on Friday evening.

In a press statement, the Society accused the DCI of failing to abide by the laws of the country while carrying out their investigations on Mumias Sugar Company.

“The Law Society of Kenya has learned with great disappointment of the arrest of Prof. Tom Ojienda, SC and LSK Representative to the Judicial Service Commission together with Peter Wanyama Advocate for unspecified alleged offences,” read the statement.

Prof. Ojienda has since denied the claims of fraud levelled against him.

“We have sought audience with the DCI with no avail. We reiterate our call on the DCI to adhere to the Rule of Law while undertaking criminal investigations of any nature against any person.”

The lawyer’s body further accused the DCI of going against Article 49(1)(f) which requires an arrested person to be brought before Court as soon as possible and not later than 24 hours.

“This kind of practice is objectionable, in bad faith and contrary to Article 157 (11) which requires the DPP to prevent and avoid abuse of the legal process,” said LSK.

“I wish to confirm that the Council is taking this matter seriously as it touches on the independence of the legal profession. The Law Society of Kenya Chief Executive Officer together with Council members are on the ground following up on the matter,” they added.

The DCI was further urged to urgently release the two advocates and grant them police bond unless serious factors mitigating their release have emerged.

“Advocates are officers of the Court. We do not consider the current matter as a matter that requires denial of police bond. We urge and call on the DCI to urgently release the two advocates. As officers of Court,advocates have a duty to avail themselves to Court when required to,” said the LSK.

A statement released from the office of the DPP on Friday revealed that Mumias Sugar Company lost Ksh.89million that was paid out through fraudulent schemes.

Prof. Ojienda is accused of faking court proceedings to obtain money as legal fees from the sugar miller.