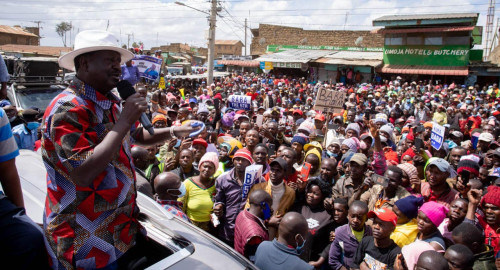 ODM leader Raila Odinga has promised to seal all corruption loopholes should he clinch the country's top job in the forthcoming August elections.

Speaking at a roadside rally in Nakuru county on Sunday, Odinga has said that corruption has been a major impediment to the progress of the nation and needs a determined leader to exterminate it.

The former premier affirmed that his government shall be impartial in rooting out individuals involved in graft cases despite their social class.

"We will fight corruption. Corruption is a big enemy to our nation. Not onlyfor the rich but also for the common mwananchi," said Odinga.

In a lightly-veiled attack to UDA leader William Ruto, Odinga said that he shall expose everyone who is involved in graft cases singling out those who hand out loads of money while attending rallies yet the amounts are not parallel to the salary they get.

"I have been the prime minister of this country for over 6 years and I kow where the money is, I know where they enter and steal our money. Kila mwezi jamaa anatoa milioni mia moja na mshahara yake ni milioni mbili peke yake,hio pesa ambayo natoa ametoa wapi?" he added.

The ODM boss further added that he will tap into the agricultural sector by embarking on a subsidy model on farm inputs after August 9.

He said farmers across the country have been subjected to high cost of ffertilizers, among other farming items hindering food production.

"After August elections,I will ensure that manure will be charged below Ksh 3000.I spoke with Uhuru the other day and I assure you in less than two weeks you will see the prices go low. We want to help out farmers through a system called smart agriculture," he stated.

Odinga was flanked by several lleaders,including Laikipia Nderitu Murithi and his Nakuru counterpart Lee Kinyanjui and MPs said he has discussed the fertilizer issue with PresidentUhuru Kenyatta even as he promised a relief.