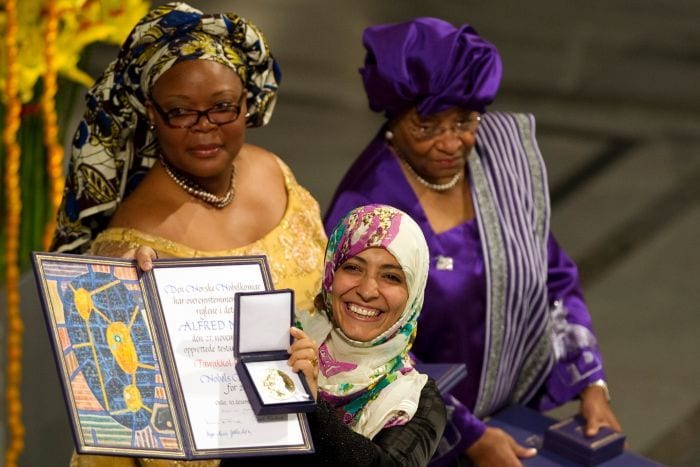 A Liberian teenager was awarded a prestigious international prize on Monday for his role in fighting for justice for child victims of physical and sexual violence in the West African country, where the legacy of wartime rape still lingers.

Abraham Keita was just nine years old when he joined a child-led protest in West Point, one of the biggest slums in Liberia’s capital, to demand justice for a teenage girl who was sexually abused and brutally murdered by her foster parents.

He later became a member of the Children’s Parliament, the driving force behind a campaign to enshrine children’s rights to education, healthcare and birth registration in law. Liberia’s 2012 Children’s Law has since been hailed as one of the most comprehensive on the continent by campaigners.

“I was inspired to do something by the murder of the girl in West Point and the terrible situation in Liberia for young girls – the victim could have been my sister or a close friend,” said Keita, now 17, who was named the winner of the annual International Children’s Peace Prize.

“Winning this award will give hope to children across Liberia, but a lot more needs to be done so they can be compared to children in cities like Amsterdam, Washington and London,” he told the Thomson Reuters Foundation.

Previous winners of the prize, launched by the Dutch KidsRights Foundation in 2005, include Malala Yousafzai, the youngest recipient of the Nobel Peace Prize, who was shot in Pakistan in 2012 by the Taliban for advocating girls’ rights to education.

Despite the passage of the Children’s Law in 2012, Keita said that children remain vulnerable to abuse while many perpetrators go unpunished in a country where sexual violence is rife and rape is the one of the most frequently reported crimes.

Up to three-quarters of Liberian women suffered sexual violence during 14 years of civil war in the country, while there was a spike in sexual assault and rape at the height of the Ebola outbreak, campaigners say.

Liberia launched an anti-rape campaign last year and Keita started his own movement to push for the prosecution of criminals and compensation for young victims of sexual violence.

Keita was also responsible for organising a demonstration last year after the death of 15-year-old Shaki Kamara, who was shot in the legs by armed forces after protesters had tried to break out of an Ebola quarantine in West Point.

“Children in Liberia are silenced, threatened and exposed to violence and injustice – this must change,” Keita said.

“Justice is not for the poor in Liberia … it is only for the rich. Justice must be given to children.”