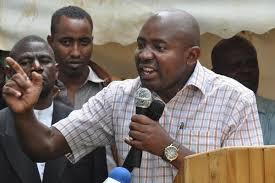 Lugari Member of Parliament Ayubu Savula has condemned the Luhya political leaders who met Deputy President William Ruto for a planning meeting ahead of 2017 General Elections.

While addressing the press, Savula said that they are not going to allow a few people, who are easily compromised, to “sell the Luhya community”.

He added that it was a shame to see how Luhya leaders’ fight over small cash from Ruto to ‘auction’ their community.

The legislator also disputed recent calls by the Jubilee Party to dissolve affiliate parties and form one party ahead of the 2017 General Elections.

“Uhuru and Ruto want to take this nation back to the dark days of a single party. I urge Luhya MPs not join that party.”

Savula also condemned the recent IPSOS opinion poll that implicated that majority of Kenyans want CORD leader Raila Odinga to retire saying that Odinga should be given a chance to practice his political right.

“I wonder why everyone wants Raila out of politics and yet the President of Nigeria is his agemate.”

Savula’s sentiments comes three days after Deputy President William Ruto met Western leaders at his Sigoi home in a bid to win back the Luhya votes.

In the meeting, Ruto urged the Luhya community to unite and vote for Jubilee Party adding that it’s the only party that can unite Kenyans.