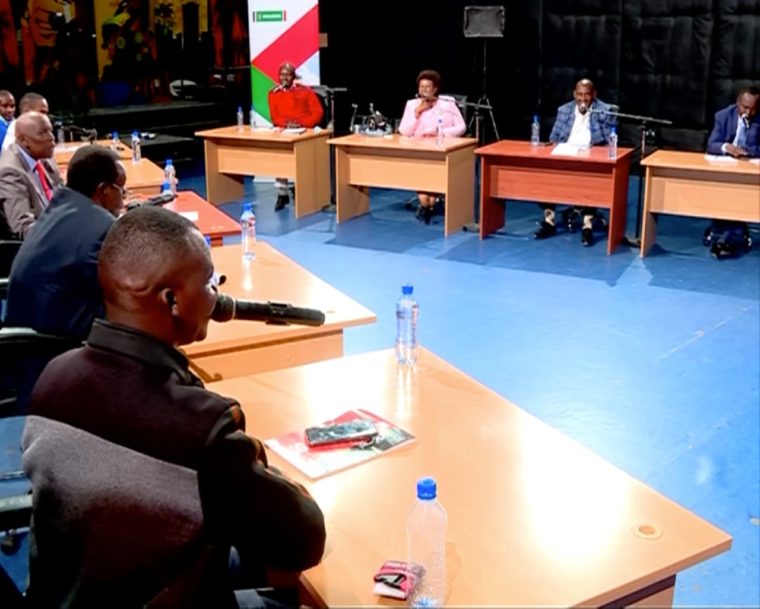 The Machakos Senatorial by-elections race candidates met during the first ever senatorial debate held by Musyi FM of Royal media services on Friday.

The candidates took turns to explain why they are seeking to replace Senator Boniface Kabaka who died late last year.

The two-and-half hour-debate gave every candidate a chance to elaborate their agenda for Machakos County.

Agnes Kavindu (Wiper Party) was first to take the podium, stating that oversight and land matters are top on her list if she is elected senator.

She pleaded with Machakos residents to give women leaders a chance this time round saying they will not regret.

Simeon Kitheka (Grand Dream Development Party) said he will fight for Machakos residents particularly those in the business sector.

Both Kitheka and Kavindu alleged that Mutua Katuku (Maendeleo Chap Chap Candidate) was planning to rig the by-elections.

The two accused the candidate and his party of taking ID numbers of residents with the aim of interfering with the oncoming poll.

“I want to raise concern over people collecting ID card numbers, the numbers are being collected by the Maendeleo Chap Chap brigade, we don’t know why they are collecting the numbers,” Kavindu noted.

Katuku, a former minister, did not address the allegations only stating that anyone with any accusation should record a statement with the police.

“I want to thank this panel, we have all the talents here, I will work with all of them when I become the senator, whoever thinks I am using county resources should record a statement with the police, let’s stop this propaganda,” he said.

On his part, Francis Munyambu (Independent candidate) said if Machakos residents vote for him, he will ensure that they are well represented in the Senate.

The candidate, who is a former police officer, narrated his experience of working with both the National and County governments which he opined will help him better serve the county.

John Musingi (Muungano Party) averred that he would address issues of food security in Masinga sub-county.

Musingi explained how he plans to ensure that there is fair distribution of resources by the Machakos County government to benefit every sub-county.

He called on Machakos residents to evaluate every candidate as an individual and not to be swayed by political parties.

Edward Musembi (Ford Asili) called on Machakos residents to vote for him pledging that he would push for promotion of local products.

He however lamented that the county gets majority of its supplies from outside yet there is need to promote local manufacturers.

Muindi Masai alias Muindi Mbingu Jnr. (Party of Economic Democracy) opined that the 30% government allocation to the youth, women and people living with disabilities is not well utilized.

He said if elected, he will make sure that the allocations benefit the required group.

The candidate also noted that he will push for the review of small business permit fee by the county government to help the businesses grow.

Jonathan Mackenzie (Independent candidate) argued that he will make sure all Machakos county borders are secure and that all land wrangles are addressed.

Sebastian Nthama (Independent candidate) pledged to fight for resources for Machakos County and ensure that public funds are secure.

According to Nthama, there is urgent need to investigate looted county funds and put the governor to account.

The Machakos senatorial by-election is slated for March 18 this year.