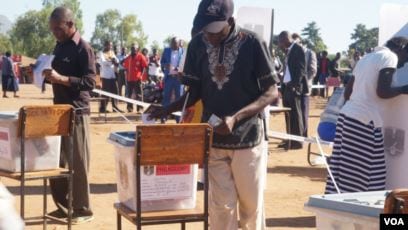 About 7 million people were expected to cast ballots in 193 constituencies.

Hundreds of people lined up to vote at Goliati polling station in southern Malawi Tuesday morning.

It’s President Peter Mutharika’s home village, where he has many supporters. Alfred Lapukeni is one of them.

“What has forced me to vote is the change which I have seen in the country,” Lapukeni said. “Also, I see that our current leader Arthur Peter Mutharika is governing the country so well, there is development all over the country.”

But not everyone in Thyolo district feels Malawi is headed in the right direction. Corruption and the economy are two major issues in this election.

Voter Charles Majanga suggests changes are needed, but he declines to say whom he voted for.

Majanga has great expectation that he has made the right choice, that he has chosen a person he thinks will help change his life. Majanga said he has done this freely without anyone to force or intimidate him.

Voting was largely peaceful Tuesday with few problems. Joseph Timothy, the election monitor for the ruling DPP Party, said he appreciated the turnout.

Timothy said the turnout was good and that is what he expected. One high-profile omission, however, has turned heads and sparked an investigation.

Vice President Saulos Chilima’s name was not found at the polling station where he went to vote. Instead, Chilima was registered at another station hundreds of kilometers away.

Chilima is among the top three contenders for president, along with Mutharika and opposition leader Lazarus Chakwera.

In the end, the vice president was allowed to vote, by virtue of being one of the candidates.

Mutharika won the 2014 election by about 450,000 votes, although he fell short of a majority. Official results from Tuesday’s vote are expected on May 29