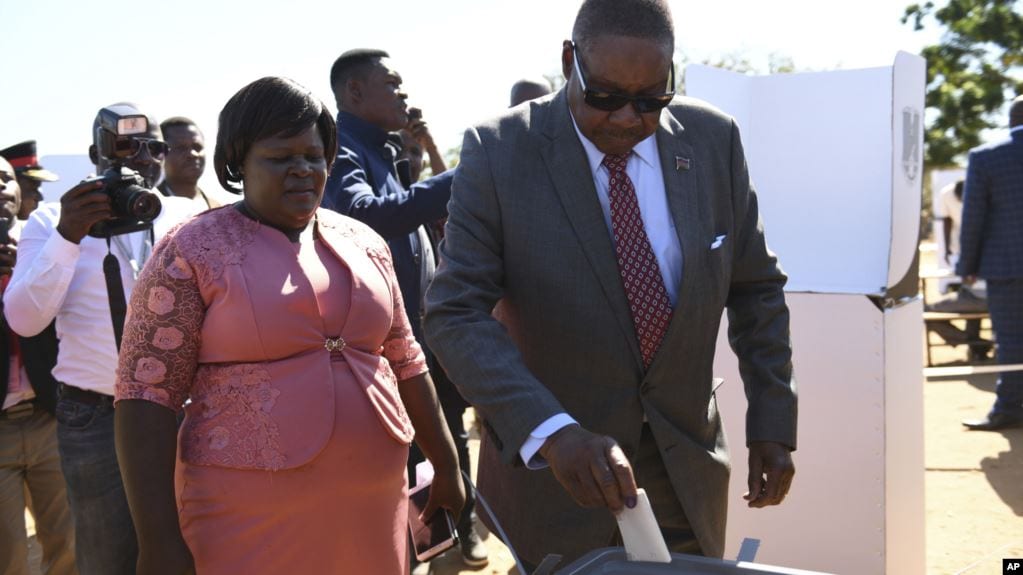 Mutharika’s victory was announced in Blantyre, Malawi’s largest city, immediately after the High Court in Lilongwe, the capital, threw out an injunction preventing the electoral commission from announcing the winner.

The ban was obtained Saturday by opposition candidate Lazarus Chakwera, who came in a close second with 35% of the votes. Former Vice President Saulos Chilima came in third with 20% of the ballots.

The other four presidential candidates collectively got nearly 6% of the vote.

In the parliamentary elections, Mutharika’s Democratic Progressive Party won 63 seats in the legislative body, while Chakwera’s Malawi Congress Party got 55 seats and 52 independent candidates were elected.

A swearing-in ceremony was set for Tuesday at Kamuzu Stadium in Blantyre.

According to the official results, 5.1 million Malawians voted in the May 21 election, representing 74% of the registered voters, said electoral commission chairwoman Jane Ansah.

Ansah appealed to those who lost to accept defeat.

“For those who have not made it this time, I say that this is the decision of the majority of Malawian voters and we must accept it with grace and generosity,” she said. “And I encourage you to continue to play your part in building Malawi into a greater nation.”

Eisenhower Mkaka, secretary-general of the Malawi Congress Party, declined to comment on the results.

But officials and supporters of the ruling DPP were celebrating their victory.

Joseph Likagwa, a DPP backer, said, “I am very happy today. I know others are sad.”

Chakwera had called for a recount in 10 of Malawi’s 28 districts, but the commission declined, saying that the results had been checked at several stages.

In ruling that the results should be announced, the judge said the electoral commission was mandated by law to finalize the electoral process in a timely manner. He also said there could be a judicial review of the result that the opposition leader had sought in his application.