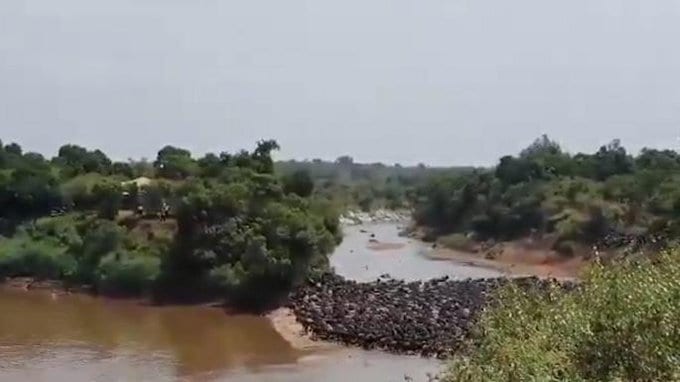 On the ground however the CS’s instructions are yet to be implemented, with the Narok County Assembly choosing to establish the facts first.

Owners of the Mara Ngenche Camp valued at nearly Ksh.300 million say the events of August 14, 2020 seen in a video that has gone viral, of the beasts climbing into the camp have never been experienced in the camp’s 10 years of existence.

It’s a video that caught and held public attention for days, eliciting hundreds of tweets and social media threads of condemnation of what appears blockage of a wildebeest crossing path by a human establishment.

Tourism CS Najib Balala galvanized the furore, when he tweeted on the 5th of September, “I have discussed with Narok County Governor @SamuelTunai about the camp built beside the Mara River, blocking the wildebeest crossing. It’s very disturbing and we expect the Governor to take action and have the camp removed.”

The CS added, “I have also insisted that we need a Maasai Mara National Reserve Management Plan that will not only enhance biodiversity, but also protect our wildlife migratory corridors from greed!”

We hit the road in search for the truth.

The Camp is located in the depth of the Maasai Mara National Reserve. To get there, you go through the Sekenani gate, that welcomes you to the Savannah wilderness, home to at least two of the Big Five and dozens of wild animals, but notable for the Wildebeest crossing spectacle every year.

It takes us nearly four hours to locate it. But not so easily. Not many of the wardens and security officers inside the National reserve are aware of the route, just a faint idea of the aerial direction.

We lose our path several times, finding ourselves in other totally unrelated camps. In this side of the Mara, there are about 22 permanent tented camps for tourists.

We have to cross the rivers, afraid of missing our path and the risk of the bewildered hippos enjoying the cool of the waters in their pools.

And since we had to inquire of the route from different officers in the park, word moves fast and reaches the camp managers.

When we finally sight the Mara river, our hopes are lifted but to our rude shock, we are not welcome. A host of locals are guarding the one pole barrier that we later learnt was 1.5 kilometers to the camp’s reception…they tell us the camp has since been closed down and all staff and officials left.

As we wait, a motorcade of Narok County Assembly Tourism and Planning committee members enters the camp. We later learn they were holed up in a meeting with the camp’s management. Never mind we had been told there was no one.

Attempts to negotiate our access proves futile. After three hours of waiting we have to leave and return another day.

On the second day, it takes us a similar journey. Easily missing the route but we eventually get there. On this day, there’s no pole in the way. We are welcomed by the camp’s Executive Director Nagib Popat.

The Mara Ngenche Camp is at the junction of Mara River and Talek River. The Mara River has seven main crossing points for the wildebeest migration.

“We have never had the crossing before. It’s the first time it happened….we had guests on that day, staff tried to wade the animals off…from what I learnt from my staff there were people and vehicles on the other hand,” said Mr. Popat.

After the cabinet secretary announced concurrence with Narok Governor Samuel Tunai to have the camp removed, the following day the camp management says they were informed of an impending demolition.

“We only we got was a telephone call that our camp was going to be removed,” adds the camp director.

According to official documentation supplied by the camp management, the Mara Ngenche Safari camp came to being following a decision of the defunct Narok County Council that in 2006 granted a 33-year lease, subject to approval by the ministry of Local Government.

The letter reads in part, “being a portion of the reserve comprising by measurement 25 acres or thereabouts within the Mara Game Reserve now referred to as “Mara Ngenche Safari Camp” to MARA NGENCHE SAFARI CAMP LIMITED.”

It was signed by P. N. Muriithia, a senior principal state counsel for the permanent secretary then.

For such an establishment to pass, it must get an approval from the National Environment Management Authority (NEMA), showing whether its fit for the wilderness. A letter signed by Engineer A. M. Kariuki for the then Director General has been supplied.

In November 2011, the commissioner of lands in a letter signed by Otieno Appida issued the lease to the Safari camp at a cost of Ksh.60,000, to take effect from 3rd October 2008, for a period of 33 years.

On its part, the Ngenche Camp was required to erect tented camps with a sleeping accommodation of 25 tourists. They were required to seek further approval if they were to put up more than 30 beds.

They were also granted exclusive business rights with the Narok County Council undertaking not to establish a similar camp within 3 square kilometers.

At the camp, there exist 12 tented camps with a minimum bed capacity of 24. The tent houses are fully kitted with necessary ablution and power source. Travel website booking.com shows that a night would cost a couple with one child up to 2,600 US dollars, equivalent to Ksh.275,000, a night with the current exchange rates.

“If you were to fly in, and get a ground package, you’d pay a couple of hundreds of dollars more,” adds the camp’s Executive Director Nagib Popat.

For locals though, it’d cost just below Ksh.20,000 per person to eat and sleep at the camp, for a night, some times it costs more. Extra charges accrue if a guest has to take game drive, to the tune of Ksh.25,0000 per person.

A lucrative business it’d appear especially if foreigners are the clients.

The camp is owned by Atua Enkop Africa, of five partners. Popat tells us four of the partners are Kenyan Indians and a local that he names John Ole Tome.

“The claim that was made that it’s owned by some British foreigner. It’s not true. It’s owned by Kenyans,” he stated.

The contract between Narok County Council and the camp requires that out of all tariffs on sleeping and food, ten percent are paid to the council in the first 10 years of lease. In the next 10 years, a percentage of 12.5 accrues while in the final 13 yeas, the camp will remit up to 15 percent of its earnings to the county government.

According to the Controller of Budget reports, Narok County is among the biggest collectors of local revenue.

In the last financial year, the county government targeted to collect up to Ksh.3.1 billion. By the end of the first nine months in March 2020, they had collected Ksh.2.1 billion, majorly from tourism activities.

Even though the performance by March was a reduction from the previous year, Narok is among top three counties to register highest percentage in collection, at 68.5 percent of target. Only Nairobi and Mombasa counties collected more money than Narok.

Since CS Balala’s tweet, Governor Samuel Tunai is yet to act to remove the camp.
Instead a County Assembly Committee resolved to conduct investigations and file a report within two weeks.

But they appear to disagree with the pronouncement to remove the camp.

“These animal are unpredictable….we might demolish this one, then another and end up losing everything… The mandate of this committee is to collect all facts and go work on the management plan,” said Julius Kirrokor, Chair, Narok County Assembly Tourism & Planning Committee.

“Apart from this particular hotel, we want to take a broader view of all hotels along the Mara. We have to protect breeding zones, high zones,” said Philemon Aruasa, MCA, Narok.

With the CS having raised questions on the place of the camp at a time there’re efforts to secure the migration routes, it begs the questions:

Was the CS out of tune with reality when he called for removal of the camp? Or did the past authorities allow the establishment of a camp at a highly lucrative location with hidden agenda? Are there wrongs that must be corrected?

Governor Samuel Tunai failed to respond to our questions, ignoring requests for an interview.