No one will be spared – Uhuru warns anti-poll crusaders 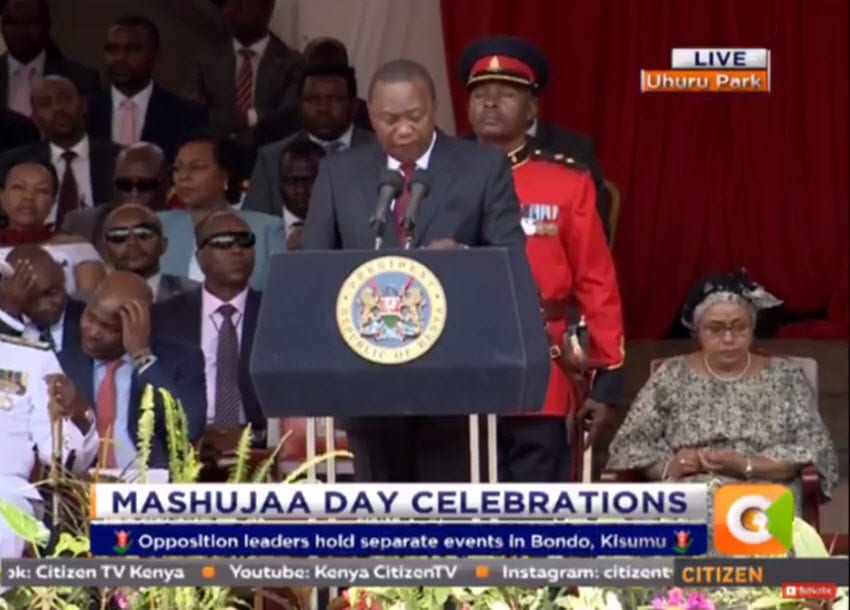 President Uhuru Kenyatta has today put on notice those planning on disrupting the repeat election slated for Thursday, October 26 saying that perpetrators will be dealt with accordingly.

In a hard-hitting speech delivered during the 8th Mashujaa Day celebrations at Uhuru Park, Nairobi, the president assured Kenyans of security and peace during the repeat poll.

“My administration will not allow a repeat of the painful past where lives and properties were lost. We vowed never to repeat the regrettable events that almost sunk us. We must, therefore, wake up and say “NO” to any misleading leader out to plunge Kenya into chaos,” said Kenyatta. “The security apparatus has been enhanced and appropriately deployed to maintain law and order.”

Kenyatta seemingly castigated the opposition following the recent loss of lives and destruction of property during the anti-IEBC protests while further warning of dire consequences to those found breaking the law.

“The law will apply equally to all regardless of social class, and no one will be spared,” he added.

While commending Kenyans on their conduct during the August 8th election, Kenyatta urged Kenyans to uphold peace.

“The coming election demand that we remain calm and peaceful. We must desist from divisive acts, which our enemies can use to harm us. “ said Kenyatta

These sentiments come even as NASA announced a change from the “no reforms no elections” campaign slogan to “no elections on October 26th” campaign.

NASA leader Raila Odinga is holding a separate event in Bondo to mourn supporters who were allegedly shot dead by police in Bondo and Kisumu counties during the anti-IEBC demonstrations.

Mashujaa Day is observed on October 20 to honour those who contributed towards the struggle for Kenya’s independence.