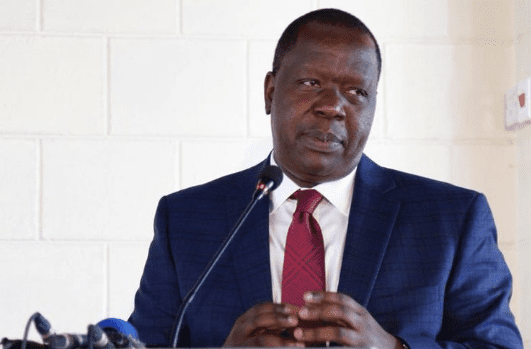 This is after the Senate on Tuesday afternoon shot down a report recommending investigations and prosecution of Matiang’i, Kipsang and top National Land Commission (NLC) officials over the Ksh.1.5 billion compensation to businessman Francis Mburu.

The NLC officials who had been recommended for prosecution include; Chairmam Muhammad Swazuri, his deputy Abigael Mbagaya, Commissioner Tom Konyimbih and Chief Executive Officer Tom Chavangi.

All eyes were on the Senate as it convened to determine the fate of the probe report prepared by the Senate Public Accounts Committee chaired by Moses Kajwang.

Though only four senators; Kipchumba Murkomen, Gideon Moi, Susan Kihika and Samson Cherargey opposed the report, the 15 who voted in support were not enough, since a minimum of 24 votes were required for the House to adopt the committee’s findings.

“Some senators absconded the sittings to deny us the numbers that were needed… I am saddened that a number of senators walked out,” said Siaya Senator James Orengo.

Narok Senator Ledama ole Kina said: “Today Kenyans lost and corruption won, we are the ones who are more corrupt, this is hypocrisy…”

Intense lobbying had preceded Tuesday’s sitting, with some senators strategically staying away, to save Matiang’i and Kipsang.

The report had recommended recovery of the Ksh.1.5 billion paid out to Francis Mburu by the Ministry of Education, through the National Land Commission.

The money was quickly moved from the bank account of whispering palms, and distributed to various companies and individuals, raising suspicion.

The senate committee also recommended Mburu’s prosecution and recovery of any taxes owed to the Kenya Revenue Authority even as the businessman threatened to sue Nairobi County Government, for allegedly allocating up to 800 plots amounting to 47 acres from his 96-acre parcel of land.

The senate committee found Mburu guilty of seeking compensation for the 13-acre parcel of land where Drive Inn Primary and Ruaraka Secondary Schools are built, yet the government had acquired it through compulsory surrender.

With the senate route flopping due to intense behind the scene machinations, attention shifts to the Ethics and Anti-Corruption Commission (EACC), that had already probed the compensation saga and handed its report to Director of Public Prosecutions Noordin Haji for action.