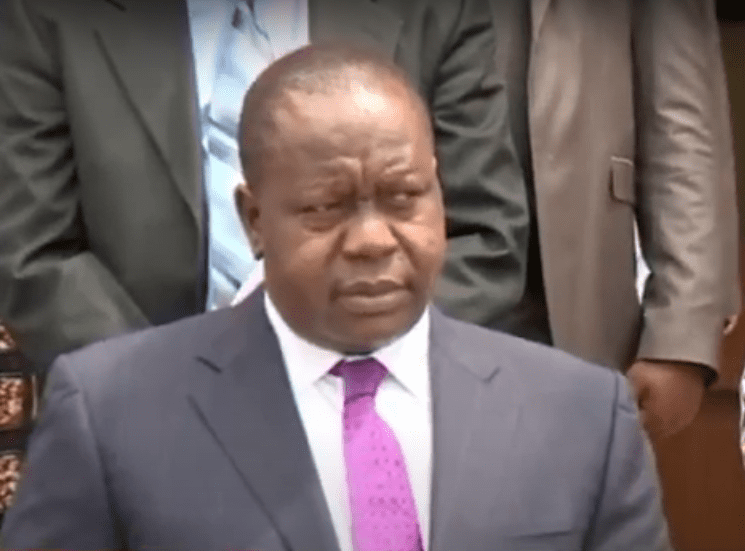 Interior Cabinet Secretary Dr. Fred Matiang’i on Thursday fired a stern warning shot to contractors across the country for delaying in the delivery of public projects.

CS Matiang’i spoke at the Kenya Institute of Curriculum Development (KICD) where he revealed that he had ordered the arrest of one such contractor in Nyandarua County who has not completed a four and a half kilometre stretch of road he was allocated four years ago.

The tough-talking CS, who had just come from a meeting with Western Kenya leaders, said he directed the police to track down the individual and present him in court to be charged.

“We have been moving around and come across cases where contractors are basically just playing games or some of them are just coming from that old school [of thought] where they believed in navigating their way around by bribing public officials,” he said.

“I was in Nyandarua on Monday where a contractor took up an assignment to do four and a half kilometres of a road about four years ago. I asked the police team to look for the contractor and arrest him so that we actually can take them to court for wasting public resources. We’re not going to play those kinds of games anymore.”

CS Matiang’i further urged grassroots project supervisors to ensure work is complete as required and on time saying Cabinet Secretaries and their Principal Secretaries cannot practically be in all parts of the country at the same time to monitor everything.

“We must love our country enough to do the right thing and do the work that we have been assigned to do. We are employed by the people of Kenya to get this work done; we cannot lie around pretending and wasting public resources,” he said.

“We have issues for example of Lake Victoria North Water Company; how is it that you can put on record that you have done x number of boreholes in Western Kenya, and half of those boreholes are incomplete or not yielding water?”