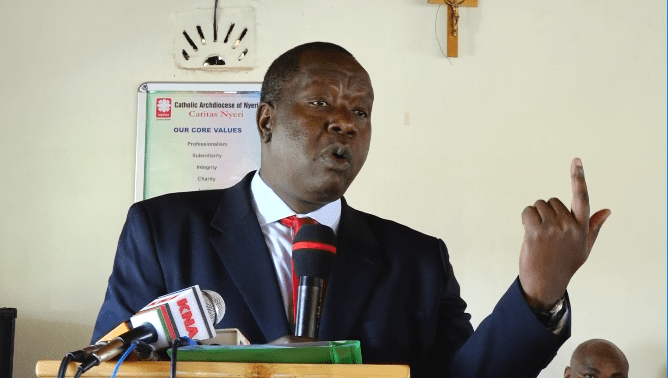 Matiang’i said his ministry is investigating a clique of officers colluding with cartels in the region to take advantage of coffee farmers ahead of the harvesting season which begins in November and stretches to January.

“Theft of coffee has almost gone out of proportion. We are going to work on a ruthless operation to sort this thing out,” said Dr. Matiang’i.

“We cannot have our farmers suffering and complaining. We are giving ourselves until December 30 to arrest these cartels and have them charged in court.”

Speaking after opening a three-day training forum for County Commanders and the National Government Administration Officers at Caritas hall in Nyeri, the Interior CS said his ministry was acting on a directive issued by President Kenyatta after farmers in the region raised complains to the president over coffee theft.

Matiang’i affirmed that the government will not spare any criminal during the operation or influential people in the country aiding criminal activities in the region.

The CS challenged security teams in Central region to conduct a comprehensive operation to save farmers from the agony they are going through.

Farmers in Central Kenya region continue to grapple with the coffee theft menace that costs them millions in losses.