Matiang’i: We must contain bad politics for peace to thrive in Laikipia 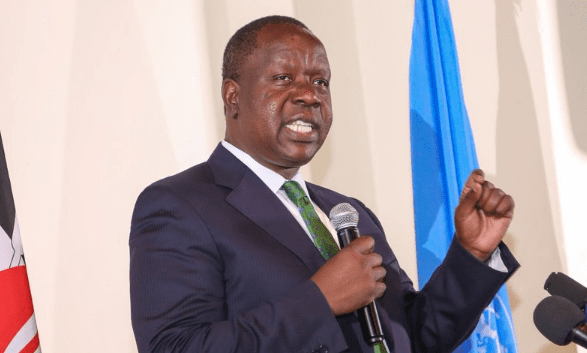 Interior Cabinet Secretary Fred Matiang’i now says that for peace to be achieved in Laikipia, bad politics must be contained.

In a statement issued on Wednesday, the CS stated that the government is committed to resolving conflicts between pastoralists and private ranchers in Laikipia County and other parts of the country by confronting the root causes of the invasions into private property.

“Periodic clashes between pastoralists and private ranchers have left a trail of death and destruction in Laikipia and in other parts of the country. We have regrettably lost many lives and livestock in waves of cyclic conflicts. That the pattern of the internecine invasions and the causative factors is predictable, reinforces the necessity and the urgency to bring it to a decisive end.” CS Matiang’i said.

According to the Interior CS, despite the attention and public resources committed by his predecessors George Saitoti and Joseph Nkaissery, recurring conflicts in pastoral regions had eluded them.

“These lands have scarcely known tranquility. Necessity therefore dictates that we must do things differently to obtain better results,” the CS said.

According to CS Matiang’i’s statement, the source of the conflicts is ranch owners’ resistance to the apparent ‘invasion’ and pastoralists’ determination to force access to these resources.

At the same time, the CS noted that violence in the region tends to flare up in the run-up to a General Election.

“Evidence gathered by security and intelligence agents however points to a more insidious agenda. The clashes, historically and as is manifesting now, tend to flareup in the build-up to general elections, around key electoral processes such as voter registration or during high stakes political discourses that invite residents’ decision-making,” he said.

Other than the fight for pastures, according to CS, Matiang’i, there is a more insidious agenda informed by politics of conquest, ethnic supremacy, clan chauvinism, and petty balkanisation motivated by individual political interests.

The CS noted that despite the government engaging both ranchers and pastoralists in a bid to broker peaceful coexistence, such agreements are breached pastoralists who sneak in large herds of animals beyond the agreed number and for durations exceeding the stated period.

“There are also endemic complaints of ranchers losing their animals to departing pastoralists in acts of plain and criminal theft. Uncontrolled pastoral herds also have the attendant risk of spreading diseases and rendering to waste investments in controlled breeding.” the CS added.

According to CS Matiang’i, the sheer size of some of the herds, as well as the logistics of coordinating their movement, suggests that not all of the animals belong to innocent herders in search of pasture.

“Prominent names, including elected leaders, are known to own some of the biggest migratory herds.” he added.

The CS appealed to herders to seek other alternatives like for instance, selling their animals to the revamped Kenya Meat Commision (KMC)

“We also encourage livestock farmers to take advantage of opportunities in investments and sector reforms introduced by the National Governments to profit from their occupation.” CS Matiang’i said.

“Since its take-over by the Kenya Defence Forces, the Kenya Meat Commission now offers premium and prompt payments for livestock.”