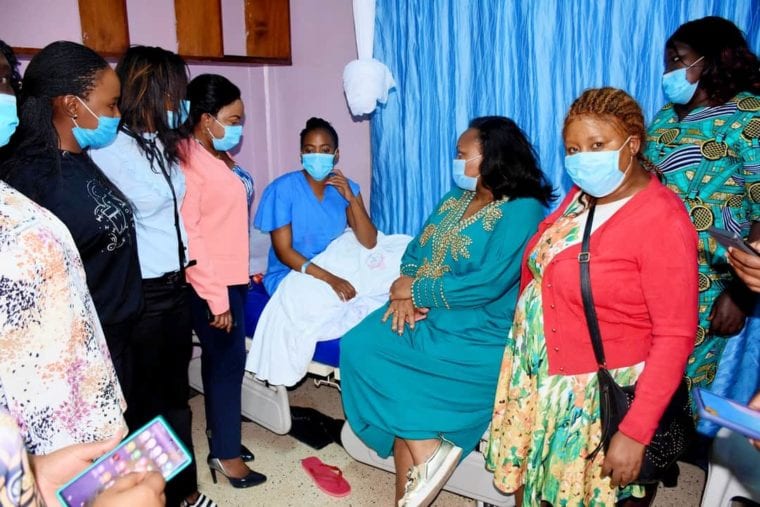 Mlango Kubwa MCA Patricia Mutheu has been admitted to the Nairobi Women’s Hospital after she was assaulted by police officers.

In a letter drafted by her legal team, Ms Mutheu noted that she was attacked by police officers in a very ‘violent manner’ for no apparent reason.

The letter further noted that the MCA was neither armed nor aggressive, noting that she had not even provoked the officers during the Tuesday incident.

“From the images (which are well within your knowledge) she was alone when she was attacked by four police officers (all male) in such a vicious manner,” the statement reads.

The letter from her lawyers demands that the four officers be arrested and removed from the public service.

“They must be removed from the police service immediately and arrested and charged for the assault that has caused grievous harm to our client without any provocation at all,” the letter by Ombeta advocates reads.

Drama began on Tuesday morning after a section of Nairobi Members of County Assembly attempted to storm Speaker Beatrice Elachi’s office to eject her.

The MCAs wanted to serve Elachi her impeachment motion notice, claiming they had collected 62 signatures.

They encountered a contingent of police who repulsed them injuring several county assembly members among them Mlango Kubwa MCA Mutheu Musyimi.

This was the latest in a series of actions that show the divide in Nairobi County that appears to pit Nairobi Metropolitan Services (NMS) Director General Mohammed Abdalla Badi against Governor Sonko who last week declared a dispute over the deed of transfer.

On Sunday, a group of Nairobi MCAs announced a fresh bid to impeach Elachi over allegations of abuse of office, corruption, poor leadership, victimization of MCAs and assembly staff, impunity, disregard for the law and county orders, and militarisation of the assembly.

The county lawmakers had on Sunday collected 51 signatures way above the 42 required for an impeachment notice against the speaker to be filed in the county assembly.