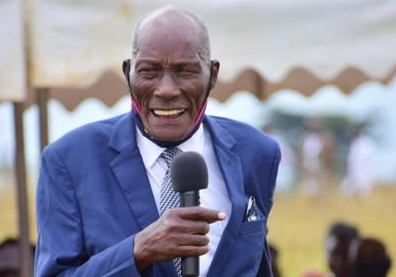 According to the family who spoke to Citizen Digital, Kibor succumbed to a long illness on Wednesday at St. Luke's Hospital in Eldoret. He was in his late 80s.

Kibor had been using medical oxygen since October 2020 after he contracted COVID-19. He had an oxygen cylinder at his home and another in his Prado vehicle for use whenever he wanted to visit Eldoret town for treatment or business.

He was recently admitted at St. Luke's Hospital where doctors confirmed his two kidneys had failed.

The prominent farmer was admitted to the Intensive Care Unit for some time before doctors confirmed his death on Wednesday.

Kibor, who was nicknamed the Chairman of the Men's Conference, was famed for good and contentious reasons.

While he was loved for his philanthropic gestures, Kibor, who was a man of many wives, on several occasions hit headlines for divorce cases as well as physical fights with his children over his vast property.

An Eldoret court in 2017 allowed Kibor to divorce his third wife about a year after divorcing his second wife with whom they had been married for over 50 years. He later married a fourth wife.

During Valentine's Day, his name would become a trending topic as men who don't value the day took to social media to write about the imaginary men's conference they would be attending chaired by Mzee Kibor.

In 2019, however, he addressed a men's gathering where he is reported to have advised men to be faithful to their wives.

Kibor, whose first wife passed away over three decades ago, is survived by over 20 children.