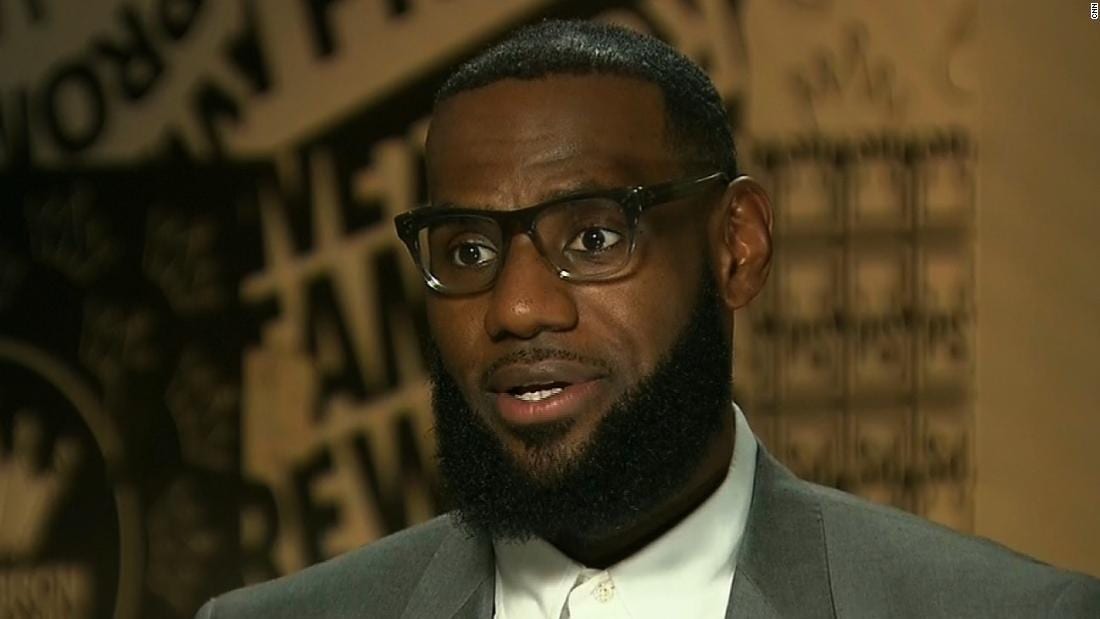 It all started on a quiet Friday night, when CNN re-aired Don Lemon’s interview with LeBron James.

The interview focused on James’ contributions to his hometown of Akron, Ohio, including a new public school for at-risk third- and fourth-graders there. But the two men also discussed politics. James told Lemon that President Donald Trump has used athletics and athletes to divide the country.

“I can’t sit back and say nothing,” James said.

The President was watching. Shortly before midnight, he tweeted: “Lebron James was just interviewed by the dumbest man on television, Don Lemon. He made Lebron look smart, which isn’t easy to do.”

“I like Mike!” the President added in what appeared to be a reference to the ongoing debate on who’s the greatest NBA player of all time, LeBron James or Michael Jordan.

Now Lemon and Jordan have both responded, while James has shrugged off the insult. And most curious of all, first lady Melania Trump weighed in, siding with James over her husband.

It seems Trump’s late-night tweet has led to another disagreement between the President and his wife.

How? Well, in their responses to the President’s tweet, CNN and Lemon both invoked the first lady’s #BeBest initiative, which aims to support kindness and respect.

The first lady’s office was asked by news organizations for comment. Instead of ignoring the requests or mirroring the President’s attack against the NBA star, the first lady’s spokeswoman, Stephanie Grisham, praised James and his charitable work in a statement provided to CNN.

“It looks like LeBron James is working to do good things on behalf of our next generation and just as she always has, the First Lady encourages everyone to have an open dialogue about issues facing children today,” Grisham said.

“As you know, Mrs. Trump has traveled the country and world talking to children about their well-being, healthy living, and the importance of responsible online behavior with her Be Best initiative.”

Grisham added that the first lady would be open to visiting James’ “I Promise” school.

What was the President watching on Friday night?

Let’s get back to the interview for a moment. The James sit-down was a big scoop for Lemon, who hosts “CNN Tonight” on weekday evenings.

In the interview, James made a reference to football player Colin Kaepernick, whose kneeling protests launched an NFL movement, and fellow NBA star Stephen Curry, who last year said he would not visit the White House after the Golden State Warriors won the championship, prompting the President to disinvite him.

“He’s trying to divide our sport, but at the end of the day, sport is the reason why we all come together,” James said.

When Lemon asked, “What would you say to the President if he was sitting right here?” James said “I would never sit across from him.” He added: “I’d sit across from Barack, though.”

Trump is famous for his counter-punching. But his insulting response was curious for several reasons. He has praised James in the past, repeatedly calling him a great player and a “great guy.” Those tweets were back in 2013 and 2015.
More recently, in 2017, Trump claimed on Twitter that “I never watch Don Lemon.”

His insistence that he doesn’t watch CNN is frequently contradicted by his complaints about the network.

The New York Times reported last week that Trump was enraged when he boarded Air Force One and saw the first lady’s TV set was tuned to CNN. He evidently wanted all TV sets tuned to Fox News. In response, Melania Trump’s spokeswoman Stephanie Grisham said she will watch “any channel she wants.”

CNN’s public relations department made a sly reference to that brouhaha in response to Trump’s insult on Saturday morning.

“Sounds like @FLOTUS had the remote last night,” @CNNPR wrote. “We hope you both saw the incredible work of @KingJames.”

Trump replied: “Lebron James was just interviewed by the dumbest man on television, Don Lemon. He made Lebron look smart, which isn’t easy to do. I like Mike!”

Sounds like @FLOTUS had the remote last night. 📺 We hope you both saw the incredible work of @KingJames. #BeBesthttps://t.co/3Ok0z9Z6Ro

Other journalists and athletes also came to Lemon and James’ defense. Some outspoken critics denounced Trump’s tweet as another display of racism by the President.

Acclaimed sportswriter Bill Simmons wrote that James is a “smart dude” and “one of the most thoughtful athletes we have.” He said Trump’s jab “feels more than a little racist.”

And if Trump was trying to drive a wedge between James and Jordan, he failed.

On Saturday, Jordan ignored Trump’s praise of him and said he has James’ back.

“I support LeBron James. He’s doing an amazing job for his community,” Jordan said through a spokeswoman.