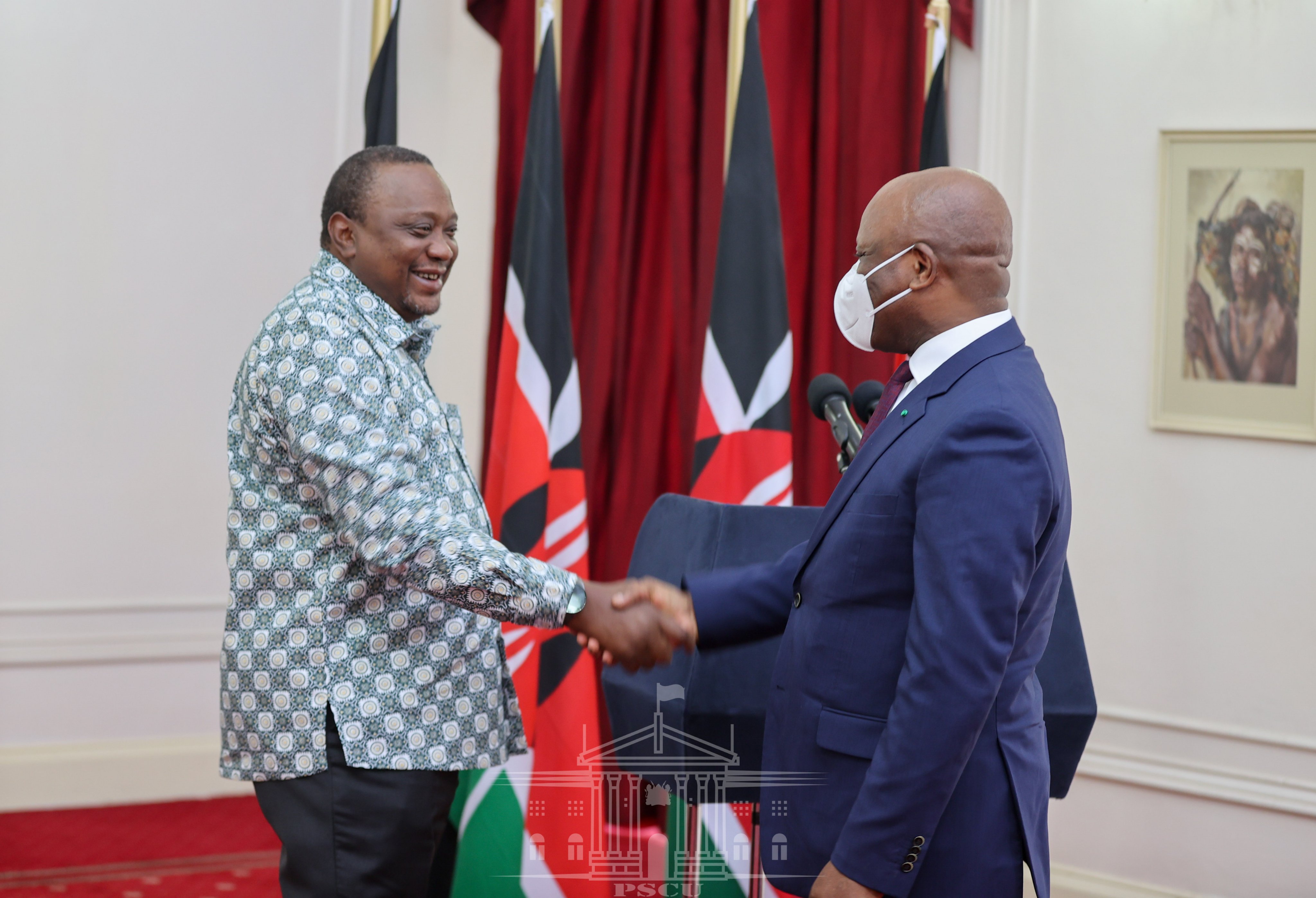 President Uhuru Kenyatta at the signing of an MoU between Kenya and Moderna to establish the first mRNA manufacturing facility in Africa. PHOTO| PSCU

President Uhuru Kenyatta on Monday at State House, Nairobi witnessed the signing of a memorandum of understanding between Kenya and Moderna to establish the first mRNA manufacturing facility in Africa.

The state-of-the-art mRNA facility in Africa is expected to produce up to 500 million doses of vaccines each year.

President Kenyatta has been in the forefront championing for the African continent to manufacture its own COVID-19 vaccines in order to meet the demand of its population. The Head of State has always emphasized the fact that  Africa’s capacity to manufacture vaccines would help arrest emerging pandemics.

The President pointed out that the setting up of the mRNA manufacturing facility will be a game-changer, especially for Kenya which has had a vision to produce vaccines.

“We are celebrating one of the greatest things that has possibly happened since the onset of COVID-19 at the African continent,” said President Kenyatta when he spoke.

The President reiterated the challenges faced by the African continent during the COVID-19 pandemic. This was not because of lack of finances to  buy the vaccines but because the vaccines were not available for them for purchase.

His Excellency thanked Moderna company for coming up to fill the space which made the continent suffer in meeting its vaccines needs saying the new facility will go along way in enabling African countries tackle any emerging future pandemics.

“We all know the challenges that Kenya and the entire continent of Africa went through in the earlier stages of this pandemic that resulted in Africa being left behind. Not because of want but  because of lack and moderna  has come to fill that space.

“We are truly grateful, for this and I think it will be transformative not just in helping us with the current pandemic but also preparing the continent of Africa for future pandemics,” President Kenyatta said.

The President thanked the Director for  Africa Centre for Disease Control Dr. John Nkengasong and the Government of America for supporting Kenya in  its endeavor to set up the facility.

“Thank you for the support we have received from you (Dr. John Nkengasong) and your entire team from Africa CDC. I would also want to thank the American Government that has also been very supportive to Kenya and Africa not only to make this day happen but also for the support they gave us of vaccines at a time we needed them,” he added

Moderna’s Chief Executive Officer Stéphane Bancel  said  his company is committed to partnering  to provide a health solution saying the investment the company is making in Kenya is crucial as it is part of the solution to ensuring  global health equity.

“Battling the COVID-19 pandemic over the last two years has provided a reminder of the work that must be done to ensure global health equity. Moderna is committed to being a part of the solution and today, we announce another step in this journey – an investment in the Republic of Kenya to build a drug substance mRNA manufacturing facility capable of supplying up to 500 million doses for the African continent each year,” said Stéphane Bancel, Chief Executive Officer of Moderna.

He said the mRNA global public health vaccine program, including vaccine programs against HIV and Nipah, will ensure sustainable access to transformative mRNA innovation on the African continent.

Director for Africa Centre for Disease Control Dr. John Nkengasong said the setting up of the facility is critical to Africa’s security noting that the production of the vaccines will ensure the continent is able to tackle current and future  health challenges.