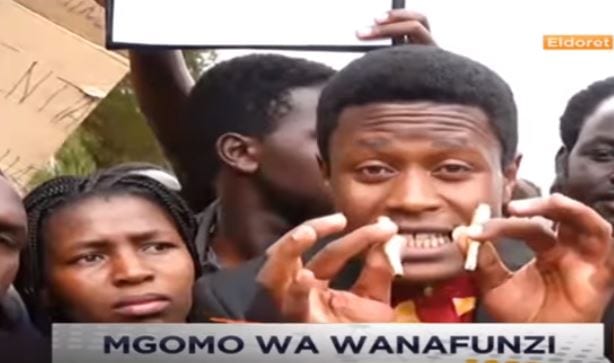 More than 300 fourth year students from the School of Law at Moi University on Tuesday blocked the Eldoret – Nakuru highway to protest over missing marks.

Led by the student union leader, Nelson Mandela, the affected students said they had camped at the school the entire month in a bid to recover the missing marks all to no success.

The visibly angry students expressed their frustration at being locked out of this year’s graduation ceremony which is barely two weeks away.

“We have toiled for four years studying only to be told that we are missing some marks in certain subjects just two weeks to the graduation ceremony. This is very unfair to us and we need an explanation from the university authority,” said Mandela.

The students further faulted the Dean, John Chebii, for turning down their requests for dialogue in order to resolve the issues ahead of the graduation ceremony.

“The affected students have been left in dilemma regarding the issue of missing marks as all the concerned persons at the School of Law including the Dean are nowhere to be seen to shed light on the matter,” added the union Chairperson.

The learners also accused police of using live bullets to disperse them during the protest in which they reportedly paralysed flow of traffic along the highway for three hours.

Eldoret South OCPD Richard Omanga, who led the operation urged the students to follow the right channels while demanding for their rights, adding that the government will not condone interruption of business and transport activities.

“We will not allow you the close the highway and disrupt the smooth flow of traffic as that is tantamount to breaking the law. If you have issues with the university, just follow the right channels to air your complaints but not to disturb innocent motorists and other road users,” the police boss warned the students.

Efforts to reach John Chebii, Dean at the School of Law, were futile as calls to his phones went unanswered.