More questions than answers in murders of Russian journalists in Africa 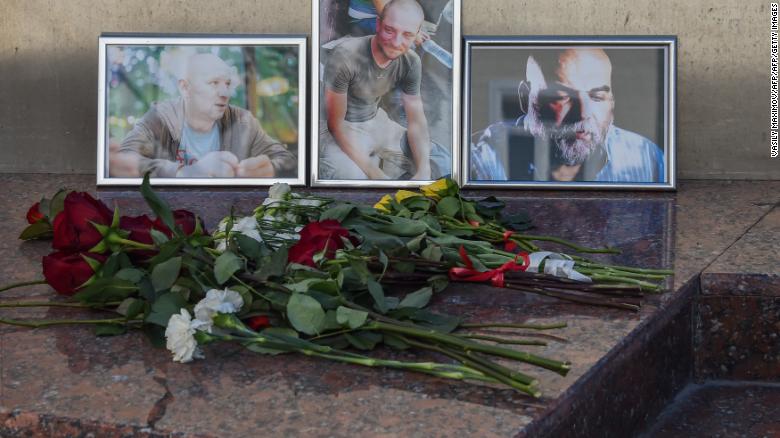 The murders of three Russian journalists investigating the work of private military contractors in the Central African Republic (CAR) are still shrouded in mystery.

But the exiled Russian billionaire who was funding their work says evidence gathered so far indicates they were not the victims of a random attack but a well-planned ambush.

The three journalists — Kirill Radchenko, Alexander Rastorguyev and Orkhan Dzhemal — were shot dead last month on a remote road in the north of the CAR. They’d gone to the country to investigate the presence of Russian military contractors linked to Wagner, a company close to the Kremlin that is also active in Syria and Sudan.

Mikhail Khodorkovsky, the exiled Russian billionaire whose foundation supported the investigation, told CNN that “some people who we know in Russia were approached by people connected with Russian mercenaries, and said they had warned the journalists not to go there, to keep themselves well away from the area.”

He said that his foundation was continuing to investigate the murders but the “only reasonable version is that either they had already learnt something or that they could have already discovered something … We think the version of a simple robbery is totally unsustainable.”

People who had been to the site said it looked like the assailants had been waiting there the whole day, Khodorkovsky said.

One man who might be able to cast light on what happened is the local driver — a former policeman — hired by the journalists. The Russian Foreign Ministry says that local authorities in CAR have interviewed him, and a Russian representative in CAR said the man was in custody in the capital.

Khodorkovsky accused CAR authorities of “hiding the driver, who is a key witness.”

Alain Nzilo, a journalist in CAR who has followed the case, told CNN last week he found it strange that the assailants appeared to have let the driver go free. “Often, the drivers are the first to be killed and not the foreigners,” he said.

Also unknown: why did the journalists insist on continuing their journey after dark after being advised by local security forces not to? And why did they change their route at the last moment, after leaving the town of Sibut?

According to a Russian official in CAR, they “had a word with someone and then changed their route.” Khodorkovsky says: “This is impossible to explain on the basis of information which we possess.”

In much less doubt is why the trio were so keen to get to CAR in the first place. According to the foundation sponsoring their reporting, they’d been investigating the activities of Wagner for months.

They wanted to find out whether Wagner — or one of its proxies — was setting up shop in CAR, using military muscle to exploit the Republic’s reputed mineral wealth

The Russian presence in CAR expanded dramatically at the beginning of this year, after the UN Security Council agreed Moscow could send trainers and weapons to the country — one of the most volatile in Africa — to help train local forces.

At least nine cargo flights full of weapons and equipment, as well as one major shipment by sea and land, arrived in CAR, along with 175 military trainers. All but a handful of them were private contractors.

Wagner is a secretive company — with no known address, phone number or official records — that recruits hundreds of former Russian soldiers, many of them special forces or “spetsnaz.” In the last few years, its contractors have appeared in a growing number of conflict zones, including Ukraine and Syria.

Both the company and its boss, Dmitry Utkin, have been sanctioned by the United States for their role in the pro-Russian separatist rebellion in Ukraine. Someone of the same name used to be a director at Concord Management, a St. Petersburg company run by Yevgeny Prighozin that is close to the Kremlin.

Both Prigozhin and Concord have in the past denied being linked to Wagner. Concord said last year: “We do not have any information about this organization. But part of Wagner’s role in Syria was to regain control of lucrative oil fields on behalf of the Syrian regime. And a company called Evro Polis had a deal with Damascus under which it would get 25% of oil revenues from fields that are recovered. Evro Polis “is owned or controlled by Yevgeny Prigozhin,” according to the US Treasury Department.

Such complex relationships may also be at work in CAR, as CNN has previously reported.

Khodorkovsky, a prominent Russian businessman before being jailed in Russia for 10 years on tax evasion and fraud charges, certainly thinks so.

“The group of mercenaries which are working in the Central African Republic are indeed connected to Mr Prigozhin,” he told CNN. “They train local government troops, they also hold negotiations with militants and they’re involved in the work of structures involved in obtaining diamonds and gold.”

Journalist Nzilo said the Russians combine basic humanitarian works with military training and mining. He said they are visible at three major mines and appear to be most interested in extracting diamonds and gold.

Another source in CAR told CNN that the Russians sometimes deploy mobile clinics for the local population at the same time as contractors and military hardware.

For Moscow, it seems, the goals of tapping into Africa’s mineral wealth and challenging Western influence on the continent overlap. Sending contractors to CAR, a country in the heart of Africa that borders six other states, ticks both boxes.

Perhaps Alexander Rastorguyev, one of Russia’s most accomplished documentary makers, and his team were on their way to finding out more. His friends at a memorial service in Moscow last week believed they would have done. But at the moment, they just want to know what happened.

Kirill Kulagin, who was close to the film-maker, asked: “Was it a contract murder, a robbery, a targeted assassination?”

“It could be anything,” he said. “We still can’t understand anything.”