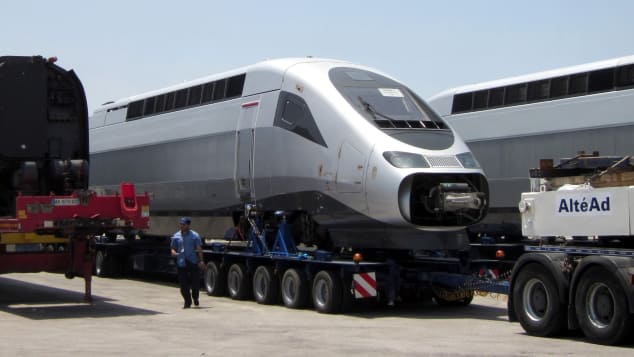 These high-speed trains are flashing along the Atlantic coast of Morocco.

The French-made double-decker TGVs are being tested today ahead of the launch of a flagship new line connecting Tangier with Morocco’s economic capital Casablanca in November.

The new trains are made by manufacturer Alstom and can reach speeds of 200 miles per hour. They will cut the journey time between the two cities by more than half — to just over two hours. This is double the speed of South Africa’s Gautrain, launched in 2012, which falls short of the criteria for high-speed rail.

The $2 billion project has been in development for a decade, funded by the governments of Morocco, France, Saudi Arabia, Kuwait, and the UAE.

King Mohammed VI and the Moroccan government expect the trains to deliver wealth and prestige for the country. But opponents claim they are an expensive folly.

High-speed trains fit within a wider program of infrastructure spending in Morocco, including the world’s largest solar power plant and several major ports, that is intended to stimulate a sluggish economy.

“The Government is continuing its reforms and major investments to improve the business climate and attract foreign investors,” reported the African Development Bank in its “Economic Outlook 2016” for Morocco.

The Tangiers-Casablanca route is expected to generate a sharp increase in passenger numbers that will boost tourism, support wider economic growth in the cities, and recoup the investment on it.

“We aim at six million passengers a year after three years of commercial operation, instead of three million currently,” said Mohamed Rabie Khlie, director general of national rail operator ONCF, in a recent interview with Le Monde. “This should enable us to achieve an operating margin that far exceeds that of conventional trains and will justify the development.”

The director general went on to add that growing passenger numbers had caused “saturation of the network,” making the new line a necessity.

He denied that an upgraded service would lead to high costs for passengers.

“We will run trains intended for Moroccans and thus adapted to the purchasing power of Moroccans,” said Khlie. “We do not want a train reserved for high-end customers.”

The new trains carry risks as well as rewards, according to Zouhair Ait Benhamou, an economic analyst at the Financia Business School in France.

“The ONCF business model is based on the French model in which trains are heavily subsidized,” he says. “If the number of passengers does not materialize in two to three years, the government will have to provide subsidies.”

The government will hope to stimulate new economic activity in areas along the route, according to the analyst.

“I suspect there are some places the government wants to develop as new tourist areas,” says Benhamou.

“They could also attract an automaker to build a facility. Peugeot is thinking about creating a plant in Kenitra, and if the high speed train goes through this city it would create a logistics hub for them.”

The new train line will impress foreign investors but they are likely to remain wary of Morocco, according to Riccardo Fabiani, a senior analyst at the Eurasia Group.

“If you are a businessman deciding to install an operation in Africa and you are torn between Morocco and another country, this kind of modern world-class infrastructure could help tip the balance,” he says. “But there are other problems with the domestic economy.”

Fabiani cites poor governance and corruption as major concerns, as well as “human capital” issues such as a severely under-performing education system. These issues reflect the priorities of a government which is comfortable with uneven development, he believes.

“The current authorities are replicating the colonial model of looking at some areas like Tangier and Casablanca but forgetting the rest of country,” says the analyst. “So there is world class infrastructure in one area and untarred roads in others.”

Such disparities have fueled the “Stop TGV” campaign, a coalition of activists arguing that the investment could be better used for failing public services.

“Morocco is a poor country and the top priority should be education,” says Omar Balafraj, a leader campaigner and member of parliament for the Federation of the Democratic Left party.

Balafraj tells a joke that he feels captures the folly of the project: “A man meets a homeless man who is almost naked, and asks him what he needs. He answers: ‘only a ring.'”

But despite such reservations, the project is almost certainly too far advanced now to be stopped in its tracks.

The high-speed Tangier to Casablanca service will soon be welcoming its first passengers.